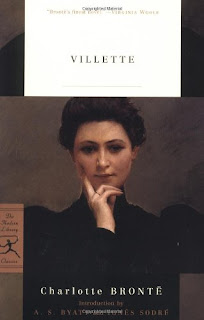 I am finally revisiting Charlotte Bronte.  Villette is another book which has been sitting on my TBR shelf for (ahem!) about five years, so when Wallace of Unputdownables suggested the read-along, I knew that participating would inspire me to finally pick it up .  It's been years since I read Jane Eyre, one of the first classics I really loved; strangely, I have yet to reread it.  (Might be a perfect choice for an audiobook -- I love rereads in the car because I don't feel pressured to finish them quickly since I already know the endings).   All I knew about this novel was that it is loosely autobiographical and has something to do with a teacher and Brussels or some such thing.  Sometimes, it's best not to know too much about a novel before you start it, so as not to have preconceived notions, right?

I've actually finished more than 100 pages but am technically not supposed to comment on more than the first five chapters.  It seems okay so far.   Basically, this is the story of Lucy Snowe, a young lady with some sort of family difficulties -- I assume later on that she will have financial difficulties and love problems as well, because isn't that what most young ladies faced during the Victorian era?  Well, in Victorian literature, anyway.

However, the first five chapters have very little information about Lucy, and this puzzled me.  In the first chapter, we learn that young Lucy is having some sort of family issues and has been sent off to visit her godmother, a widow with a teenaged son, Graham.  During her visit, a child of a relative has come to stay with the godmother, a little girl named Polly.  Polly's mother died recently and her father is bereft, so Polly has come to stay while he gets his act together.  He is traveling to France for business of some sort.  Polly is naturally sad at having lost her mother and misses her father terribly, so she's kind of withdrawn and sad.  The only one she really becomes attached to is Graham, who is about sixteen.

Basically, the entire first three chapters of this book is about Graham and Polly and their friendship as observed by Lucy -- we learn virtually nothing our narrator.  I didn't even know how old she was but I'm going to assume she's in her early teens.  I couldn't even figure out how old Polly was, but from the way she talked, I assumed she was about 10 -- until the book mentioned she's only six!  Either Polly was incredibly precocious, or six-year-olds were much more mature back then.  Or else Charlotte Bronte didn't know squat about six-year-olds.  I have two daughters who are now older than six, and they never talked like Polly at that age.  Well, Villette was written about 150 years ago, and times change, right?

Anyway, Polly finally leaves to join her father and the action shifts back to Lucy.  I can only assume that Graham and Polly are going to resurface later in the book, or their relationship is somehow symbolic of something else that's going to happen.  In chapter four Lucy is a destitute young lady working as a companion, and her life is a little bleak.  She has to go and make her own way in this world.  I was surprised that there was so little background about Lucy and her family.

The next few chapters do pick up a little and it's all about Lucy, but I'll save that for next week's post.  I was a little bored with Polly but I'm optimistic about the rest of the book, and wondering if Polly and Graham show up again.  If nothing else, this is a fairly fast read for a Victorian novel.  Who knows, maybe I'll love this and I'll take a chance with Bronte's other two novels, The Professor and Shirley.

Has anyone else read this?  Are you participating in the readalong?  How do you like it so far?  And what about the other Bronte sisters' works?  I hated Wuthering Heights, liked The Tenant of Wildfell Hall, and I still haven't touched Agnes Grey, which is waiting patiently on the TBR shelf.  It might be next!
Posted by Karen K. at 4:04 PM