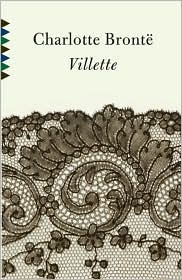 So, Villette, chapters six through eleven.  I had some real momentum while reading this the past couple of weeks and I'm way ahead, up to chapter 20.  Either I need to slow down my reading or starting writing posts as I read, because I'd almost forgotten what I'm supposed to be posting about.

After a brief review, I remember that this is the part in which Lucy makes a life-altering decision.  After going to London on her own in search of work (which I think is pretty gutsy for such a young girl) she decides to travel to France to look for a job teaching English.  She doesn't know a soul in France but on the crossing she meets a young girl, Ginevra Fanshawe, who is at a French school in a town called Villette (hence, the title) and Lucy decides to go there to look for work.  Upon arriving at the town at a late hour, she luckily encounters an Englishman man who gives her directions a reputable inn; however, she gets lost, and serendipitously finds Madame Beck's school for girls.

Though Lucy has no references and little experience, Madame Beck sizes her up and decides to give her a shot as a nursery-governess.  Much of the weeks' reading are about Lucy's experiences at the school and a great description of Madame Beck, who is kind of a tough lady making her way in what is still largely a man's world.  Lucy and Madame Beck don't exactly like one another, but it's obvious that there's a lot of grudging respect between the two.  Eventually, Lucy works her way up in the school, teaches more advanced students and apparently becomes pretty fluent in French.  The Englishman reappears, and so does the young lady from the boat, Ginevra.

So far this was my favorite section.  We got a lot of background and character development, especially Madame Beck.  I don't know if I like her exactly -- she's tough, but not quite a villainess -- and I think that's how Bronte wants the reader to feel.  I still don't know that I've gotten to Lucy very well, though I admire her guts -- first, she's gone to London on her own; then, she travels to a foreign country without any contacts or prospects, found herself a job; and now she's taken control of some uppity French students.  There's a great scene [MILD SPOILER ALERT!] in which Lucy is thrown into a situation substituting for the teacher of 60 teenaged girls, not much younger than herself, and she knows if she gives them an inch they'll walk all over her.  She has to show them that she's in control, and she takes a sassy student and locks her in a closet.  Well done!

I've now read about 40% of Villette but there's a lot left to go.  I'll try to catch up and write posts as I'm reading from now on  -- hopefully I won't lose momentum if I slow down a bit.  This book isn't quite as engaging as Jane Eyre, but I'm willing to give it more time.

I'm reading this as part of Unputdownables Villette Read-A-Long. Visit the link if you'd like to read more thoughts on this book.
Posted by Karen K. at 9:53 AM