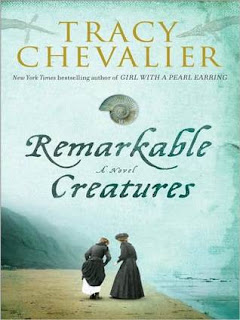 Remarkable Creatures is Tracy Chevalier's latest historical fiction novel.  I haven't read any of her novels since Girl with a Pearl Earring, which I loved, one of my favorite books, definitely one of my favorite historical novels.  I've started a new book discussion group at my library and since I'm in charge, I got to choose the first two books!  This was my first choice.

The setup:  Remarkable Creatures is based on the lives of two real women, Mary Anning and Elizabeth Philpot, who lived in Lyme, England in the early 1800s and were fossil hunters.   Mary is a working-class girl who lives near the beach, making extra money for her family by unearthing and cleaning up "curies" or curiosities.  Elizabeth is about 15 years older, a spinster who moves to Lyme with her two unmarried sisters.  Their prospects are not good and their married brother has basically shipped them off to live somewhere cheaper.  Mary and Elizabeth forge an unlikely friendship over their mutual love of fossils.  Mary in particular is somewhat famous for her amazing fossil finds.  She was actually a bit of a local legend her entire life, since as a child, she was struck by lightning and survived.  The story takes place over many years, and includes love, jealousy, and heartbreak.

This book brings up a lot of interesting issues, especially about religion, evolution, class differences, and the role of women during the time period.  The study of fossil evidence of creatures that no longer exist makes Elizabeth question the whole idea of creation, and she doesn't get a lot of satisfying answers from so-called experts.  And the way women were treated just makes me want to scream, and it's more than just whole thing about marriage prospects, no jobs, no respect -- at one point, Elizabeth is walking down a London street alone -- shocking!!! -- and people are staring at her because she obviously must be some kind of strumpet.

There were a lot of things I liked about this book.  The story is told in alternating points of view, and Chevalier does a nice job of creating two very distinct voices.  The alternating chapters aren't labeled or indicated in any other way that they're different characters, but it's quite obvious to the reader.
One my favorite things was the period -- it's set in the early 1800s, Regency through early Victorian, so there was some overlap with Jane Austen.  It's also set in Lyme, where Jane Austen set an important part of Persuasion, which is my favorite of her novels.  In fact, Jane Austen and her novels are mentioned, but only in passing, so it didn't feel at all like Chevalier was ripping Austen off, like so many modern authors.  In fact, if you're a fan of Jane Austen, and you want to read more books set during this period, I'd recommend this book by far over some of the shameless Austen pastiches that seem to be everywhere these days.

Update:  I just found out I can add individual replies to comments.  Many thanks to Blogger for finally adding this feature, and to Simon at Stuck in Book for posting about it!
Posted by Karen K. at 9:55 AM