As a participant in the Classics Challenge hosted by November's Autumn, I'm posting a monthly prompt.  This month's assignment:  The Author. 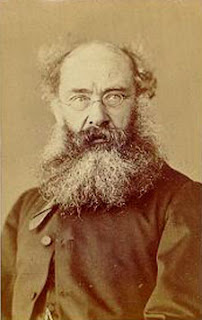 Some background:  Born in London, son of a failed barrister.  However, his mother, Frances, became a successful writer.  After his father's legal practice failed in 1834, Trollope Senior and fled to Bruges, Belgium to avoid being jailed for debt.  The whole family moved with him to Belgium and were supported by Mrs. Trollope's income as a writer.  Young Anthony accepted a clerkship in the British post office and returned in the fall of that year.  He had a reputation as being unpunctual and insubordinate.  One incident in particular is interesting -- a debt of 12 pounds to a tailor was turned over to a moneylender and eventually grew to 200 pounds.  (This incident, along with many other from his life, would appear eventually in his fiction.)

At first Trollope hated working for the post office, but stuck with it, and eventually was promoted to postal inspector in Ireland.  This involved a lot of train travel and he spent his time on trains writing.  According to Wikipedia, he occasionally dipped into the Lost Letter Box for ideas for his novels.  He also invented the British postal box: 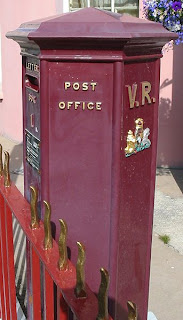 I could write a very long post about Trollope's life, and I hope to read more about hin, including his autobiography which sounds fascinating.  Trollope was extremely well-traveled, and visited Europe, the Middle East, the U.S., Australia, and South Africa, among other places.  Everywhere he went, he wrote, eventually publishing 47 novels, plus numerous short stories and other writings.  He's most famous for his two series: The Chronicles of Barset, the story of life in the provincial county of Barchestershire; and The Pallisers Novels, a series of political novels about Parliament.   He also wrote many stand-alone novels, including The Way We Live Now, which many consider to be his finest work.

I've only read four of Trollope's works so far and I really enjoyed them.  I was waffling between Trollope and Dickens for my next big fat Victorian read and I'm pretty sure Trollope is going to come out the winner.

Who else is a fan of Trollope?  Which are your favorite novels so far?
Posted by Karen K. at 11:02 AM