The Power of One by Bryce Courtenay 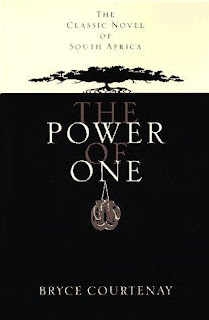 Sorry for not posting lately, I've worked the last seven days straight and even though I sit in front of a computer a large part of my day, I think the library administration would frown on writing my personal blog on the city's dime.  By the time I get home I have no desire to write anything.  But I have been reading!  In the past two weeks I finished not one but TWO books off my challenges list.  The first one was The Power of One by Bryce Courtenay, which came highly recommended by someone in a book group years ago.  I bought it at a bookstore in Orlando for the sheer purpose of getting my parking validated at a pricey shopping mall, which actually backfired -- they wouldn't validate and so I had yet another unread book on the shelf AND had to pay for parking anyway.  Hmpf.

But I digress.  I'd heard this was a great book but all I knew was that it was about South Africa and boxing.  I find Africa fascinating but I am not a sports fan and I absolutely HATE boxing -- the idea of people beating each other up for FUN is repellent to me.  It's no wonder this book sat on the shelf unread for so long.  I finally sucked it up and picked up the book a couple of weeks ago, and to my surprise, I really, really liked it, boxing and all, though it's more than 500 pages long.

The setup:  a little boy nicknamed, aged 5, is sent off to boarding school in South Africa in the 1930s.  His mother has had some kind of a nervous breakdown and there's no father around, so they ship him off to school.  Unfortunately, he's the only English boy at the school of Boers.  (Did you know that the white South Africans hated each other as well as the black South Africans?  I had no idea.)  So, not only does this little boy have to suffer because he's a wee little thing who should be home with his family, he's horribly abused by all the nasty bigger kids for being different (and smarter).  The thought of sending a child under twelve away to school horrifies me, but FIVE?  What were they thinking???

Anyway, eventually his family move and he leaves the wretched school all alone on a very long train journey, where one of the porters keeps an eye on him for the trip.  Turns out this porter is an amazing boxer and takes the boy, who is now nicknamed Peekay under his wing and also to a boxing match.  This is a life-changing event for Peekay, who decides that someday he'll be the welterweight champion of the world, and no one will ever pick on him again.

The rest of this book is a coming-of-age story about Peekay and how he comes to terms with all the bullies of the world, in school and life, as he goes through school and trains to be a boxer, with the backdrop of WWII and the beginnings of apartheid I learned a lot of things about Africa in this book, which I liked, and also about boxing, which, shockingly, I also liked.   Somehow Courtenay was able to describe the boxing training matches in a way that made it accessible and interesting even for a non-sporty person like me (I still haven't figured out the rules of American football).  Apparently boxing is sort of scientific, not just people beating on each other.  (It's sort of like in the new film versions of Sherlock Holmes when they slow the action down and explain Sherlock's thought processes, then show the speeded-up version, if that makes sense.)

Anyway.  I rather liked the boxing bits, and the school bits, plus there's lots of great stuff about the African country and how beautiful it is, and Peekay has a wonderful relationship with a music professor who is his neighbor and becomes a father figure to him, and that's lovely.  My one complaint about this book is that Peekay is just too perfect.  He becomes an amazing boxer.  He's brilliant.  Everyone loves him, especially all the black Africans.  He's not just good at everything, he's the best ever. (Except music, at which he is just pretty good).  He becomes this angelic figure up on a pedestal, and he's so perfect he started to annoy me.  Plus, the ending didn't work for me.  Without giving anything away, I'll just say that it didn't seem to fit in with the rest of the book.

I am glad I read this book, it's definitely worth reading if you're interested in Africa or you like a good bildungsroman, or if you like sports (or even if you don't).  I'm happy to say that this book counts toward two of my challenges:  TBR Challenge 2012 and Chunkster Challenge 2012.