The Diary of a Nobody by George and Weedon Grossmith 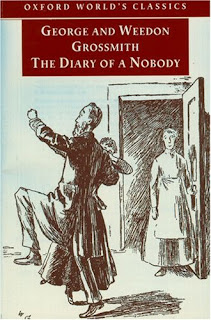 After Dr. Thorne, I was tempted to jump right back into another big fat Victorian doorstopper, but on a whim I grabbed Diary of a Nobody and put it in my bookbag on my way to work the other day, thinking it would be a fun, light read on my lunch hour, and as it's epistolary fiction, it would be easy to read in bits and pieces during breaks.

True, it was an easy, light read, but somewhat disappointing.  It's supposed to be hilarious, but it was nowhere near as good as Three Men in a Boat or one of my favorite epistolary novels, The Diary of a Provincial Lady.  Both of these had me laughing out loud and I recommend them over and over.  Honestly, Diary of a Nobody is just meh.

Diary of a Nobody was published in 1892, serialized in Punch magazine.  It's the story of Mr. Pooter, a middle-aged senior clerk at some financial institution in the City of London.  He begins a new diary after he moves into a new house in a London suburb with his wife Carrie, and it's a year in his life.  Pooter's life is pretty ordinary, but he thinks he's fascinating.  It's just little vignettes about his life.  It's mildly amusing and interesting to read about what Victorian life was like (if this can be interpreted as truly representative) but I didn't find it that funny.  I barely cracked a smile most of the time I was reading it.  It was okay, but I can't really see myself recommending it to anyone except the most die-hard fans of Victorian literature.  It's especially disappointing because I bought this book since it wasn't available at my library, and I've moved twice since I bought it, which means I've packed and unpacked it twice!  Hmpf.

The best things about it were that it's very short, just about 130 pages, and I finally read it and can take it off the TBR bookshelf.  It also counts toward my both my Victorian Challenge, and my Classics Challenge, though foolishly I didn't put it on the list for my TBR Challenge -- I sort of thought it would be cheating to repeat too many books on my challenges.  Oh well, I'll know better next year.

Now I have to decide if I should tackle Martin Chuzzlewit, which I'm supposed to be reading with an online group over a period of several months; or Framley Parsonage, which I checked out from the library.  I honestly don't think I can handle both of them at the same time.  Bloggers, what do you think?  Dickens or Trollope?  Or something completely different?  And has anyone else read Diary of a Nobody?  Did you love it or were you disappointed, like me?
Posted by Karen K. at 2:44 PM