A Bell for Adano by John Hersey 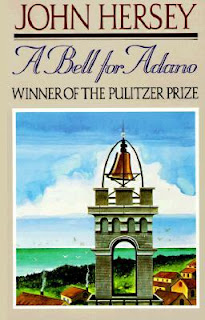 Of all the books I've read this year, I think this one is the most satisfying.  Partly because I really enjoyed reading it, but mostly because this is one of the books that has been on my shelves, unread, for the longest.  I know where I bought it, though not exactly when.  However, I can tell you that this book has been packed and unpacked at least ten times.  It's been in three different houses in Florida, three in Texas, one in Nebraska, an apartment in Chicago, and in storage with the rest of our household goods while we were stationed overseas in Japan.  Does that give you an idea of how long I've owned this book?

I am delighted to report, also, that it was a really good book.  A Bell for Adano is a Pulitzer Prize winner, which doesn't necessarily guarantee I'll like it, but I think that's the reason I never chucked it into the donation bin during any of my moves.  I finally started it the other day when I was looking for a good audiobook and realized that the library owned it -- I could listen to it on my commute to work, which would speed things along.  But after a few minutes, I really didn't like the narrator, so I picked up my own print copy and gave it a try.

Happily, I was rewarded for all my tenacity.  This book is really a charming story.  Major Victor Joppolo, the American child of Italian immigrant parents, is put in charge of an Italian town called Adano after the Italian surrender during WWII.   Major Joppolo has to deal with military bureaucracy, cultural differences, and the looming threat of the Germans as he tries to get the town running smoothly again after years of wartime shortages, fascism, and corruption.  One of his goals is to replace the town's treasured bell, a 700-year-old relic that had been taken by the Fascists and melted down for bullets.

Honestly, I don't know why I put off reading it for so long.  It's not a very long book, and it's not a difficult read.  I'm not a huge fan of war stories, though I do enjoy reading about how everyday people deal with wartime on the home front.  A Bell For Adano isn't exactly a war story, since the war is mostly over when it starts, so in essence it is about the war at home for the Italians.  Parts of it did remind me a little of Catch-22, because it does poke fun somewhat at military bureaucracy.  It's not making of fun of the military per se, though it does satirize all the ego-massaging that has to go on in a big organization, which I'm sure isn't exclusive to the military.

I did really like the characters and the story, though I did find the ending a little abrupt -- it really left me wishing I knew what happened to all the people.  Parts of it are very funny, and parts were sad and made me tear up.  I did end up reading most of it in one day because I got so engrossed in it.  It was quite uplifting after some of the terribly depressing books I've read recently.

I am thankful for Roofbeam Reader's TBR Pile Challenge for inspiring me to finally get around to reading this book -- it was one of a dozen books I promised myself I'd read this year, and I've now completed eight of them -- one a month, right on schedule.   It's really inspired me to keep reading the books from my own shelves, and I've already started my list for the 2013 TBR Challenge.
Posted by Karen K. at 2:41 PM