East of Eden by John Steinbeck 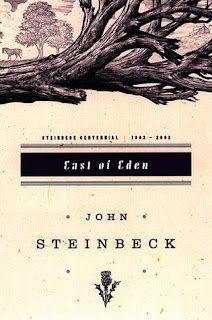 East of Eden is one of the books I've had on my to-read list the longest, ever since I started on my quest to read more classics back in 2005.  Somehow, I managed to graduate from high school and college without reading a single word of Steinbeck.  When I started to read classics as an adult, I knew I'd finally have to read his books, and at first I was very apprehensive -- Grapes of Wrath sounded so dire.  But I joined an online classics group and one of the first books I read with the group was Travels with Charley, which I absolutely loved, so I became a Steinbeck convert.

I bought my copy of East of Eden at a library sale about four years ago, and I've packed and unpacked it in three different houses.  For about three years now, it's been the book I most wanted to read off my TBR shelves.  It was my daughter's assigned summer reading for her high school English class next year, so I decided to read it along with her.  And it was really worth it.  Why did I wait so long??  Was I saving the best Steinbeck for last?

It's kind of hard to describe this book.  It's long and sprawling, and spans about 50 years, from just after the Civil War to World War I, and the story is covers American coast to coast  from New England to California.  Inspired by the Genesis stories of Cain and Abel and Adam and Eve, it's the story of the Trask family, about sibling rivalry and fathers and sons.  It also contains some of Steinbeck's best characters, including what is probably one of the most evil characters in American literature.

Though it's Steinbeck's longest work at 600 pages long, I raced through it in just a few days.  The plot and the characters are really compelling.  It starts out with two half-brothers in New England, Adam and Charles Trask, who are competing for their father's love, living on a farm after the Civil War.  Just like Cain and Abel, their father favors one son over the other, and the less-beloved son takes his jealousy out on his brother.

In this story, there are two sets of brothers, and love for a woman also fuels the rivalry.  I don't want to give too much away, but Steinbeck weaves together Biblical allusions and California history in a masterful way.  He also incorporates characters based on his own ancestors.  Adam Trask moves out to the Salinas Valley, where Steinbeck grew up.  There's a lot of local color with a delightful Irish family, the Hamiltons, and a faithful family servant, Mr. Lee, who starts out as a cook but becomes much more to the family, a tutor, nanny, and he's basically the one holding the family together after things start to fall apart.

I loved this book although I did find some flaws in it.  Steinbeck is pretty heavy-handed with the Biblical allusions -- not only are there two sets of brothers (with initials beginning with C and A) Steinbeck spends paragraphs with characters philosophizing about the Bible and Cain and Abel, just in case the reader didn't get it.  Also, Lee is sort of an amazing wise Oriental sage, spouting wisdom -- he's just too good to be true. But there is so much great stuff in the novel that I can overlook the parts that bothered me.

After finishing it, I really wanted to discuss it with someone else who was reading it with me -- my daughter is plodding along with it, but there's so much in it that I don't think she'll understand; in fact, I'm not even sure why this was assigned to high school sophomores!  I really wish I had chosen this instead of Tortilla Flat for my library's book group -- it's longer, but there's so much more in it and it's so much better!  It's more than twice as long but it's a far superior novel.  If you're interested in Steinbeck at all, do yourself a favor and don't bother with the shorter works.  East of Eden and The Grapes of Wrath are absolute masterpieces and everyone should read them at least once.
Posted by Karen K. at 9:13 AM