The Death of the Heart by Elizabeth Bowen 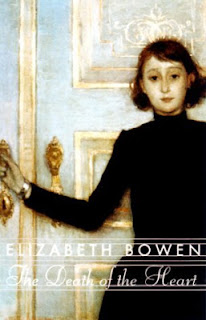 Well, this book has been sitting on my TBR shelves for at least five years, and I finally started to read it about a month ago.  It took me a long time to get through it, and I was completely perplexed.  I just did not get this book at all.

Here is the setup: set in 1930s London, sixteen-year-old Portia Quayne, who was recently orphaned, moves in with her much older half-brother Thomas and his wife Anna, who have no children.   Thomas' father left him and his mother when he was a teenager, after he'd had an affair with Portia's mother, who became pregnant.  The first Mrs. Quayne magnanimously decided it was better for everyone if Mr. Quayne divorced her and married his mistress, so that the unborn child would not be illegitimate.  Mr. Quayne, the second Mrs. Quayne, and Portia lived cheaply on the Continent, until Portia's parents died one after another and she was left with no one but Thomas.

Anyhow, now she's moved in with him and his wife, who are childless.  Thomas has an advertising agency, and a youngish friend of Anna's, Eddie, has gotten a job with Thomas' firm.  He's 23 but he starts hanging around Portia.  Basically, the story is about how Portia's innocence is lost.

It all sounds like it's going to be very sordid and scandalous, but basically, this is a book in which nothing happens.  My last book, Barnaby Rudge, was a book that was all plot and very little character development, and this one seemed like just the opposite -- it's all character's and dialogue, and very little action.  I kept waiting for something really shocking to happen, like the underage Portia having an affair with someone much older, but nothing like that happened.  The most shocking things are that Eddie is (gasp!) holding hands with another girl;  and . . . wait for it. . . Anna reads Portia's diary!!!!  Ye gods!!

Now, I know that this is a book that many people love.  Goodreads and the blogs are full of people who rave about it.  It has also been listed on Modern Library's Top 100 Books of the 20th Century, which is where I first heard of it.  It was not a difficult read, and I agree, some of the writing was very beautiful and insightful (I'll try to find a clever quotation to insert).  But most of the time I wanted to smack Portia and say Get over yourself!!!  There's a very brief mention of Mussolini at one point, and I wanted to scream at the characters, "Any day now, the Luftwaffe are going to start dropping bombs all over London.  Then you'll see what real problems are."  (Okay, that's unfair, since the book was published in 1938;  it's easy for me to make this judgement knowing what's about to happen since obviously Elizabeth Bowen couldn't.)

Of course, I had a relatively uneventful, boring childhood.  Nobody died, nobody had any affairs or divorces;  I don't have any illegitimate siblings anywhere, so maybe I have no right to complain.  Really, I didn't see why Anna and Thomas didn't just ship Portia off to boarding school.

And the ending just seemed very abrupt and unresolved.  Maybe I just need someone much less pragmatic to explain it all to me.  I don't feel like it was a complete waste of time, because parts of it were quite enjoyable.  I just don't see what the fuss is about.  If someone out there in the blogging universe is a huge fan, I apologize if I've offended you -- and please tell me if there's something obvious that I missed.
Posted by Karen K. at 9:30 PM