Top Ten Books That Scare Me The Most 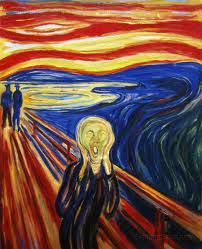 So, I'm about a third of the way through one of the biggest, fattest books on my TBR Challenge List, The Good Soldier Svejk by Jaroslav Hasek.  Quite frankly, I'm pretty pleased with myself for tackling it, because it's long, and it's about war, and it's in translation from a former Communist country.  And the coolest thing is that I'm actually enjoying it.  Earlier this year, I made a list of 20 books for a Classics Spin, and one of the categories was "Five Books That Scare Me."  So far this summer, I've read three of the five on the list, and I've actually enjoyed all of them!  (The other two were Lady Chatterley's Lover and Giants in the Earth.)

So it got me thinking that hey, maybe I could work up the nerve to read something that really scares me.  Not books that are scary, necessarily, like horror.  Really, what I mean are books that intimidate me, that I'm afraid to tackle, because they're really long, or sound really depressing, or, quite frankly, I'm afraid I'm not smart enough to understand or appreciate.  Basically, pushing myself.  I'm not a total idiot -- I read Dickens and Zola and Edith Wharton, though I have no desire to ever tackle Ulysses.

So here is a list of books, mostly from my own shelves, which I have not read and which I've been putting off.  Am I right to be scared, or should I put them in the library donation box?

1.  Moby-Dick by Herman Melville.  It's 600 pages of men chasing a whale. Rumor has it the whale doesn't show up for 100 chapters, and it's full of allegory which is not my strong point.  But I have a beautiful Penguin Deluxe Classics copy which was free, so I feel that I should try it sometime.  Plus I like books about sailing, since I live miles from any ocean. 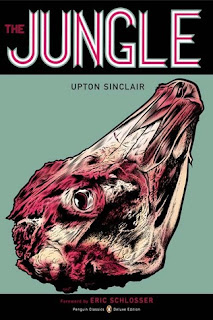 2.  The Jungle by Upton Sinclair.  Another Penguin Deluxe Classic that I own.  The cover of this particular edition gives me nightmares.  I'm told by a good friend that it isn't any more gruesome than Germinal, which I loved.

3.  Les Miserables by Victor Hugo.  It's 1,232 pages, and there are entire chapters about the Paris sewer system.  I know many people love this book but I find the length daunting.  I bought the Penguin clothbound classic edition because the cover was really pretty.

4.  Notre-Dame de Paris by Victor Hugo.  I have a Wordsworth Classic edition which I actually bought at the Notre Dame gift shop. (It still has the price tag on it, in Euros which I find really cool).  Bought after I walked halfway up the 20 gazillion steps and desperately needed a break, because there are no elevators.  The people who work there must have awesome thigh muscles.

5.  To the Lighthouse by Virginia Woolf.  Bought at a library sale for $1, so if I never read it, I won't feel the loss too badly.  Stream-of-consciousness is not my thing, so I don't know if I'll ever actually read it.

6.  The Invention of Curried Sausage by Uwe Timm.  A very short book, a novella really, but I started reading it and it's set in Germany after WWII, which sounds really depressing.  I bought it at Half-Price Books because it was on that 1000 Books to Read Before You Die list.  I'd never heard of it before that and the title really intrigued me.

7.  The Canterbury Tales by Peter Ackroyd (retold).  Another Penguin Deluxe Classic.  They've been retold into modern English, but anything written before 1800 makes me nervous. 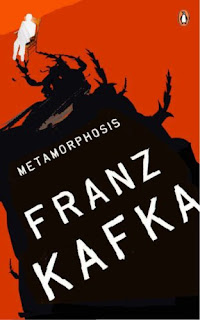 8.  The Metamorphosis by Franz Kafka.  A guy wakes up and he's turned into a giant bug.  I know it's an allegory, but I really hate bugs.

9.  Crime and Punishment by Fyodor Dostoevsky.  (Also The Brothers Karamazov). A long Russian novel about crime.  And punishment.  Seriously, Russian novels scare me.  My last was Doctor Zhivago, not a great experience.

10.  Don Quixote by Miguel de Cervantes.   It's long, it's picaresque, which means it has sort of a meandering plot, and it was published in 1605.  That's enough to scare anybody.

So -- those are the books that scare me the most, at the moment -- this list could change.  Are my fears well founded?  Are these actually awesome books that I will grow to love, and kick myself for waiting so long?  Or should I run screaming in the other direction before I read them?