The Ladies' Paradise by Emile Zola 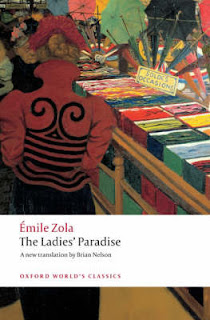 Slowly, but surely, I am working my way through the entire Rougon-Macquart cycle of novels by Emile Zola.  My eighth effort was The Ladies' Paradise, the eleventh novel in the series.  Loosely based on the famous Bon Marche department store in Paris, this is the story of Denise Baudu, a poor shopgirl of twenty who has come to Paris from the provinces, hoping for a job.  Her parents have both died, and she has two younger brothers to support -- Jean, 16, who's a bit of a ne'er-do-well and already a womanizer; and little Pepe, who is only five.

After her parents passed away, Denise was promised a job by her uncle, who owns a draper's shop in Paris.  Unfortunately, by the time Denise arrives unannounced, business is very bad, mostly because of the expansion of the nearby department store complex, Au Bonheur Des Dames (aka The Ladies' Paradise) which is swallowing up nearby small businessmen, then undercutting them and putting them out of business.  (Sound familiar?)  It's owned by Octave Mouret, the playboy from the previous novel, Pot-Bouille.  He's now a widower who inherited pots of money from his late wife, and has invested all the money into the store, creating a store like no other, at which you can get absolutely everything you need.

Jean has an apprenticeship and goes off on his own (and repeatedly gets into romantic entanglements); Pepe is boarded with some neighbors, but Denise is forced out of desperation to take a job at the evil incarnate, Au Bonheur des Dames.  Her uncle is furious but what can she do?  Mouret has also gone back to his playboy ways, and has his eye on Denise, who blooms as she becomes a skilled shop worker.

Like the train in La Bete Humaine, the main character in this book is the department store itself -- it's basically a satirical look on consumerism and the rise of the very first big-box stores.  I could not help thinking of Wal-Mart as I read this, and how it has squeezed on so many independent retailers.  Zola uses the novel to satirize consumerism, greed, and the rising power of women in the retail market.   I was also struck, over and over, how history is repeating itself with big box stores like Wal-Mart, though I'm pretty sure the employees at Au Bonheur Des Dames are treated better than Wal-Mart employees!

However, the characters themselves aren't that well developed, and I found Denise in particular to be a little too good to believe, too forgiving and long-suffering.  I've seen a lot of this type in Trollope novels lately and it's beginning to get on my nerves.  I suppose it's a Victorian trope, though at least the young women in Trollope and Zola aren't nearly as bad as the ones in Dickens' novels.

The Ladies' Paradise (#11 in the series, and the eighth I have completed) is fairly popular for a Zola novel, though nowhere near Germinal or Therese Raquin.  You'd think the subject, shopping and commercialism, would make it more popular.  I was inspired to pick this up by my recent binge-watch of Mr. Selfridge -- the entire series had been taking up space on my DVR for several months.  I've also heard that The Ladies' Paradise was adapted into a BBC series called The Paradise, and I've just discovered it will begin airing on PBS here in the States on October 6!!  The folks at BBC know how we Yanks love those British period dramas!

Anyway, it was interesting and entertaining, but not nearly as good as Germinal or La Bete Humaine, which are my favorites by Zola so far -- I'd rank it as a second-tier Zola novel, closer to The Belly of Paris or Pot-Bouille.  Still, worth reading, especially if you like shopping and fashion, or if you're in withdrawal from Mr. Selfridge.  I have a feeling I'll see more blog postings about it in the fall after the TV show starts to air.
Posted by Karen K. at 9:11 PM