Giants in the Earth by O. E. Rolvaag 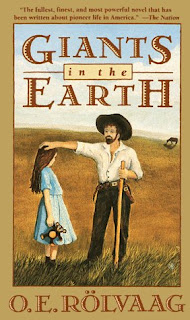 Back in 2000, we moved to Nebraska, a state about which I knew absolutely nothing, except that it was surrounded by six other states which I'd not yet visited, and that they grew a lot of corn.  I did not know that it was full of kind and charming people, that the weather was lovely eight months of the year (I won't lie: winters were long and often harsh) and that it was within driving distance of several major cities, including Kansas City and St. Louis.  It turned out to be one of the nicest places in which I would ever live.

Anyhow, not long after our arrival, an old college friend came for a visit, bringing a hostess gift of two books about life on the prairies:  My Antonia and Giants in the Earth.  I did finally read My Antonia with a book group while living right there in the heartland (and I've accumulated another stack of books by Willa Cather) but somehow, Giants in the Earth kept getting packed and unpacked for the next three moves (it did not even cross the ocean for our assignment in Japan; it was relegated to storage for three years).  When I made this year's TBR Pile Challenge List, I buckled down and committed to reading it after schlepping it unread for thirteen years.

So, finally, I finished this book last week, while on vacation in Michigan -- not so much corn in suburban Detroit, but the weather was pretty nice and I had lots of spare time to read.  And I was pleased to discover that after all these years of waiting around and moving this book from house to house, I did enjoy this book.  It's the story of a Norwegian pioneer family after the Civil War:  Per Hansa; his long-suffering wife Beret; and their three (soon to become four) children.

First published in Norwegian back in 1927, Giants in the Earth starts out as the family is alone on the prairie, trying to catch up with some other Norwegian families who have left Minnesota and are going to start a new settlement in the Dakota territories (not Nebraska, but relatively close to where I eventually lived in Omaha).  Per Hansa et al have become separated from the group and are lost on the prairie; Beret is pregnant and terrified of what will happen if they don't get their bearings and meet up with the rest.  Everything they own is stuffed into the wagon drawn by their two oxen, and it's like a giant sea of grass.

Eventually, they catch up with the rest and all seems well.  The rest of the story is several years in the life of the family; basically, it's like Little House on the Prairie, but from the point of the view of the adults.  Seriously, what was it really like for Ma out there, all alone in the Dakota territory, living in a sod house?  They were miles from anyone else -- can you imagine giving birth all alone like that?  And living in a house made of dirt?  And the winters -- well, winters in Nebraska are long and hard.  I love the change of seasons, but I really enjoy the Texas winters -- it's rare if it drops below the thirties, much less snow.  Winter in Omaha can last about five months, and the wind whips over the plains, and boy, it is cold.  I loved living in Omaha but I don't know how people did it 150 years ago, miles from anyone else for days or weeks at a time.  And don't get me started on outhouses in the winter -- I haven't been camping for years, and it was in the summer.  I like my modern conveniences!

I've been a military spouse for 18 years, and since 1995 we've had six major moves, including one overseas.  They're always incredibly stressful, even in modern times with real beds, real toilets, and professional packers and movers.  I don't know how pioneer women did it back then.  These women had to deal with the cold and the dirt and they were lucky to see a midwife, much less a doctor.  And the stress of worrying about crops -- these people are dealing with plagues of locusts just like the Ingalls family in LHotP.  We've got some giant bugs in Texas but nothing like what they had to deal with.

Anyway, it's a really interesting book if you're at all curious about pioneer life.  It's an easy read (though many of the characters are named Per or Ole or Hansa) and my biggest quibble is how abruptly the book ended.  Afterward I realized that it's the first of a trilogy, so you find out what happens to the family in subsequent books, though they're harder to find.  I don't know that I enjoyed it enough rush out and track down the next two books right away but you never know, I might look for them after I've made some more progress on the TBR piles.