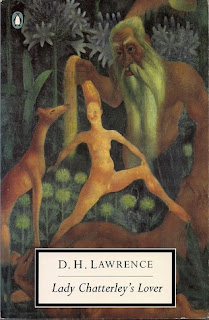 Finally, I have finished this book, which has been on my TBR shelf since 2011 when I received a Big Box of Penguin Deluxe Classics.  Which was awesome, but the box contained a few that I feared I would never read, including Moby-Dick, The Jungle, and this one.  (Plus Gravity's Rainbow and White Noise, but I've given those away to someone who will truly appreciate them).  I put it both the list for the Classics Club Challenge and the TBR Pile Challenge 2013.  And last month, it came up as my Classics Spin selection.  There was no escape.

I was a little afraid, but I'd read Sons and Lovers a few years ago (with similar trepidation) and really enjoyed it.  I was actually pleasantly surprised. Chatterley wasn't bad at all -- in fact, I rather liked it -- except for the cover of the book, which is the one I own: 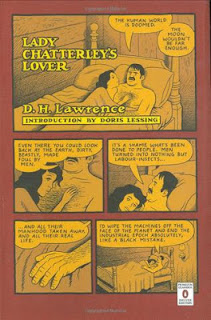 If you don't know the setup, here it is in a nutshell:  Constance Chattereley is a twentysomething woman, from the upper-middle class intelligensia.  Shortly before WWI, she married her husband Clifford.  After a month's honeymoon, he goes off to war and is gravely injured, paralyzed from the waist down.  His older brother died in the war, and he's now the heir to a title and to the family estate, Wragby Hall, somewhere in the English Midlands (sound familiar?  It's a bit like the second season of Downton Abbey, or what might have happened to Mary and Matthew).

Anyhow, Constance is bored to death at Wragby.  She's shut up there in a dreary estate, the weather is terrible, and it's somewhere in the coal-mining district, so they're surrounded by factories and coal pits, which are on their last legs. (Besides Wragby, her husband also owns some interest in the mine or the factory or something like that.)  It all sounds very depressing.  Also, Clifford doesn't seem particularly interested in Constance at all.   He's got something of a writing career going, so occasionally intelligent, creative people come to the house and she's the perfect hostess, but inside she's dying.  She hates Wragby, Clifford is very distant and cold, and she's terribly lonely.  Plus, she knows she can never have a baby due to Clifford's injury.  She's not even thirty and it seems like her life is completely over.

Clifford is desperate for an heir and tells her he wouldn't mind if she had a child, even if it wasn't his.  Meanwhile, Constance has spent a lot of time tramping around the grounds and meets the gamekeeper, who's rather dishy.  He's lower-class but has some education.  One thing leads to another and they start an affair.

I thought this book was going to be awful and dreary, but I was surprised by how much I enjoyed it.  I thought the writing was mostly very good and I felt really sorry for Constance.  I don't think she was necessarily craving sexual contact so much as intimacy -- her husband was so distant and self-centered.  Yes, he was disabled, but she was really unhappy and all he could think about was whether or not she'd take care of him.  He was really quite selfish.

Lady Chatterley's Lover was very scandalous when it was first published in 1928 -- a full version wasn't widely published in England until 1962 -- and there is a fair amount of sex in it, as you'd suppose from all the fuss made about it; however,  it really wasn't that shocking in this day and age (I'm sure it pales in comparison to Fifty Shades of Gray, which I have not read.  And you would not believe how many little old ladies at my library have read it!!  Seriously!!)


I can see how it would have been scandalous back in the day.  But if you can get past the sex, it's really about relationships and was truly insightful about attitudes of the time, both between Constance and Clifford, and the snobbery between the classes.  The fate of the miners, though a small part of the story, was also very sad.  It reminded me of the strikes that were to come later, like in Billy Elliot.  I wonder if they ever recovered or if Clifford made tons of money when the war started ten years later.

My one real complaint about the book was about the ending, which I found somewhat unresolved.  But overall, I'm really glad I finally got around to reading it.  Between Chatterley and Sons and Lovers, I'm over my fear of Lawrence, and now I'm thinking about tackling his other famous works, The Rainbow and Women in Love.  Anyone read either of them?  Did anyone else like Lady Chatterley's Lover, or did you all run screaming from the room?   And who else completed their Classics Spin selection?
Posted by Karen K. at 9:58 AM