The Children Who Lived in a Barn by Eleanor Graham 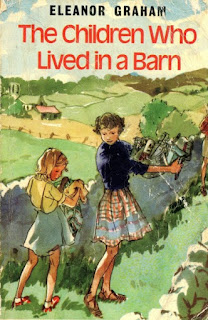 I've been hard at work on my Back to the Classics Challenge!  Recently I needed a fun, light read after some fairly heavy books.  This was a children's classic, a Persephone, and a book on my TBR shelf.  Plus it was nice and short, with some cute illustrations.

Though it's a British children's classic, I'd never heard of The Children Who Lived in a Barn until I started collecting Persephone books.  It's very much in the same vein as the American series The Boxcar Children, one of my childhood favorites.

Anyway, here's the setup:  sometime in the 1930s, the Dunnet family of seven are living in rural England, though they've just moved into a small village and hardly know anyone.  The parents get a telegram that the grandmother, who's off somewhere in Switzerland, has taken ill.  Without much thought, the parents drop everything and literally fly away, leaving the kids to manage by themselves.  Then the parents mysteriously disappear, possibly in a plane crash over the Alps, and Susan, 13, and Robert, 11, must take charge of themselves and their younger siblings, twin brothers who are 9 and a little 7-year-old sister.  Their unscrupulous landlord evicts them, but a kind farmer offers to let them stay in the barn in exchange for helping out.

At first it seems like a childhood dream to be on their own, but it quickly becomes obvious how hard it is to keep a household running, especially with a limited budget.  Susan and Robert try to make do with odd jobs and a small amount of money allocated by the bank, but things are tight, especially after school starts.  Some local busybodies have decided they'll keep an eye on the children and are none too sympathetic, mostly more judgmental than helpful.  It's the local village folk who are kinder, especially when they see how hard the older children are trying.


The children even rig up something called a "hay box" to keep their food warm during the day, kind of a makeshift slow-cooker.  Here's an illustration of something similar:


Eventually, the situation becomes dire but all turns right in the end, as this is a children's book.  I really enjoyed this -- some of my favorite childhood books are those in which the adults are out of the picture and the children are forced to take charge, like the Narnia books and the Boxcar children.

I thought the only weak point is the explanation of what happened to the parents, which seemed extremely unlikely and tacked-on.  Their characters aren't terribly well-developed and they were more immature than Susan and Robert!  However, it was a delight to read and I really enjoyed it.  I have two other classic children's books published by Persephone, The Runaway by Anna Elizabeth Hart and The Young Pretenders by Edith Henrietta Fowler.  I haven't read either of them yet but I hope I'll like them as much as this one.  Has anyone else read this book?  What about other children's classics -- which are your favorites?

Labels: 2013, Back to the Classics challenge, between the wars, British, children's, children's classics, Persephone