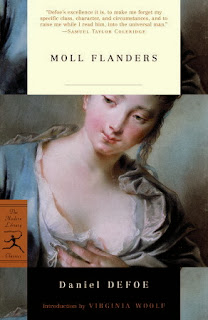 Last year, when I signed up for the Back to the Classics Challenge, I knew there were a couple of categories that would really challenge me -- specifically, pre-19th century fiction and Russians.  I was not surprised, therefore, to discover my last three categories to complete are those two, plus a non-fiction classic.

Looking back at my reading history, I've read very few books published before the 18th century -- some plays by Shakespeare, which I haven't touched since college -- Candide by Voltaire, and Robinson Crusoe.  For this selection, I had it narrowed down to three choices.  I was originally planning to read Gulliver's Travels, since I just received a lovely Penguin clothbound copy from Adam at Roof Beam Reader in a drawing (thank you again, Adam!); however, I was also considering Les Liaisons Dangereuses by Choderlos de Laclos or Moll Flanders.  I really, truly, tried to read all of them, but Moll Flanders finally won out for the simple reason that it was available on audiobook at the library, which was a great incentive.

I think the hardest thing for me about the early novels is the language.  I had a Modern Library print edition of the book as well, since I rarely listen to an entire audiobook without some print reading mixed in.  I really do find the 18th century writing style it tough to get into.  Here's a selection from the first chapter:

Had this been the Custom in our Country, I had not been left a poor desolate Girl without Friends, without Cloaths, without Help or Helper in the World, as was my Fate; and by which, I was not only expos'd to very great Distresses, even before I was capable, either of Understanding my Case, or how to Amend it, nor brought into a Course of Life, which was not only scandalous in itself, but, which in its ordinary Course, tended to the swift Destruction both of Soul and Body.

Now, I get that the Modern Library publishers are trying to preserve the original text, with the spelling, capitalization, and grammar as close to the original as possible.  Listening to it is easier -- at least I don't have the jarring random Capitalized Noun that pops up in nearly every Sentence.  And I am now grateful that I was not an English major in college, because I would have been required to read The Canterbury Tales in the original Chaucer.

Oh, and did I also mention that there are no chapter breaks in the entire novel?  That's right, the entire book is One. Long. Chapter.  No breaks!!  (Well, it could be worse -- Gabriel Garcia Marquez wrote a book that is all one paragraph.  I've forgotten which one, but I can tell you right now I'll never read it.) 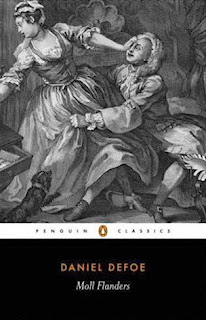 Anyway, as usual, I digress.  Once you get past the style of the language and get into the story, Moll Flanders is a pretty good tale about the fate of women in the 17th century.  Moll is born in pretty much the worst possible circumstances -- while pregnant, her mother is convicted of theft, and while sentenced to the infamous Newgate prison, she "pleads her belly," that is, puts off her sentence due to pregnancy.  After her baby [the future Moll] is born, she's transported to the colonies.

Young Moll is put in an orphanage, and after a rough start she's placed in the care of a kind but poor woman who takes good care of Moll and some other orphans in a little school, where she's raised to be a future servant.  Moll's clever and good with a needle, and ends up as a companion/servant to the daughters of a well-to-do family.  Things are going well and she picks up a lot of skills like dancing, singing, and French, but she's also growing into a lovely young woman, which does not go unnoticed by the sons of the family.  The younger falls in love with her, but the hapless and naive Moll falls in love with the older, a rake who makes her his secret mistress, thus beginning her downfall.

This pretty much sets the tone for Moll's entire life.  She's acquired a taste for the finer things, and becomes a serial monogamist in her quest for a man to take care of her; I lost count of how many husbands she marries, legally and not-so-legally.  And don't even get me started on the children -- DeFoe hardly bothers to give the various husbands and lovers first names, much less the  offspring, whose fate is barely mentioned.  I though it made Moll come off as rather cold-hearted -- after multiple pregnancies and babies, there's only one instance of Moll really caring about the fate of one of her children.  As a mother, this bothered me, and it made me wonder how this aspect of the story would have been different if the author had been a woman.

Meanwhile, Moll gets older, and eventually she has to rely on her wits more than her feminine charms.  Since her choices are few, she inevitably turns to a life of crime. For a while, she's the luckiest thief in England, making countless narrow escapes as others are transported or sent to the gallows.  It gives DeFoe a chance to let the reader know that Crime Does Not Pay. Apparently such fictional accounts of criminal life were especially popular during the 17th century;  DeFoe himself was imprisoned in Newgate, where he must have met many women with Moll's problems.  I'm not quite sure if DeFoe was trying to comment on the terrible choices women had to make to survive at that time, or if he was just trying to preach.  Moll does admit that she gets greedy and could give up stealing, but time after time, she just can't quit the criminal life.

It was an interesting read, ultimately.  Moll's pretty sassy and keeps her wits about her, and there's one section in which she's accused of a crime she actually didn't commit, which is my favorite part.  The outcome was pretty entertaining.  Now I'm going to have to go back and watch the BBC miniseries, which starred Alex Kingston as Moll and Daniel Craig as one of her paramours: 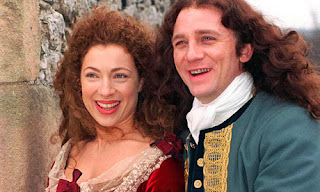 Even Daniel Craig cannot pull off that hairstyle.  Sorry, 007.


I'm quite pleased to have completed my 18th-century-or-older requirement for the challenge.  Only two more to go -- a Russian classic and a classic nonfiction.  I'm thinking about Crime and Punishment!  Thoughts, bloggers?  Who else is working on this challenge?  Have you finished?  Did anyone else read a pre-19th century book for this challenge?  How about a Russian?  And is Daniel Craig's hairstyle the most embarrassing EVER?

Labels: 18th Century, 2013, Back to the Classics challenge, British, classics