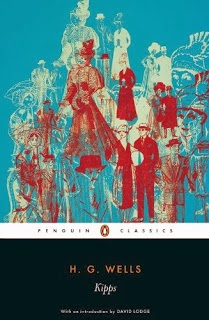 Last year, when I was making up my TBR Pile Challenge selections, I picked several books that I had been dreading for one reason or another -- Lady Chatterley's Lover; The Good Soldier Svejk; Giants in the Earth; and, finally, Kipps by H. G. Wells.  As it turned out, the first three were much better than I expected, but Kipps kept getting pushed back to the bottom of the stack.

Back in 2005, I began my quest to read more classics -- I realized how few I'd read.  Anyway, around that time I went to the St. Petersburg Festival of reading and got a bunch of books signed.  I mentioned to one author that I was trying to read more classics and she recommended Kipps, which I'd never heard of.  Oddly enough, though, I'd actually read another book by Wells back in college, Tono-Bungay, which hardly anyone else has read.  I did remember that I disliked Tono-Bungay; in fact, I really disliked the entire class, which was a modern British history class that everyone was dying to get into for some reason.  [Did I go to entire college of Anglophiles?  The professor was awful].

Anyhow, I somehow ended up buying Kipps and then ignored it for about eight years.  Well, this was the year -- I was down to my last three unread books from the TBR Pile Challenge, and I packed Kipps into my carryon luggage for Thanksgiving vacation.  I thought if I finished all my other books, I would be forced to read this.  And it worked!!  Kipps turned out to be a hidden treasure, my favorite book by H. G. Wells so far.

Published in 1905, Kipps is a social satire, the story of the rise and fall of a young man, Arthur Kipps.  The story begins in the 1870s, when Arthur is a young boy and he is sent off to live with his aunt and uncle, who run a small draper's shop in a town called New Romney.  He doesn't know anything about his father, and has only vague memories of his mother.  When he's fourteen, he leaves school and is sent off to Folkestone to apprentice at a larger draper's shop.  After four years, a chance encounter one night leads to a series of events; the upshot is that Kipps finds out that someone is looking for him, because he's about to inherit a nice sum of money.  Kipps is an heir; the father he never knew died years ago in Australia, and his paternal grandfather was a gentleman and has left him twelve hundred a year.

Overnight, Arthur's life changes.  He goes from being a common shop assistant to a well-to-do man, and he has a hard time adjusting to his new situation -- is he a commoner now, or a gentleman?  What about his old friends?  His aunt and uncle?  Arthur quickly finds a social-climbing fiancee and a new circle of friends, but doesn't quite know how to mix in Society.  I kept wondering if these new friends were real or whether they were just trying to bilk him out of his newfound fortune -- it reminded me of all these horror stories I hear about when people win the lottery and how it actually ruins their lives.

There was one part in particular that really embodied Arthur's experience: he's in London, famished and trying to find a restaurant to have lunch.  He's too shy and embarrassed to go to an upscale restaurant -- to afraid to make a faux pas.  He decides to turn down a side street and go into the first working-class restaurant he sees.  He finds a fish and chip restaurant and is about to go in but realizes that now he's too well dressed, and won't fit in there either!  It's really sad.

Naturally, Arthur's life isn't a fairy story, and as you'd expect, things take a bad turn.  But Kipps isn't so much about Arthur's financial situation as it is a social commentary, about class-consciousness, which is apparently far more rigid in England that it is in the U.S. -- I always read in books and see bits on British TV about people knowing their place.  (Don't get me wrong, we still have class-consciousness in America, but I think people just pretend it doesn't exist.  It does.  Plus racism is alive and well, but we don't need to go into that).

Towards the end, I was eager to find out how Kipps' story would resolve.  I'm happy to report that it came as quite a surprise, but in a very satisfying way.  Arthur Kipps is a delightful character and I loved his story.  Another success from the TBR Pile Challenge!
Posted by Karen K. at 8:03 PM