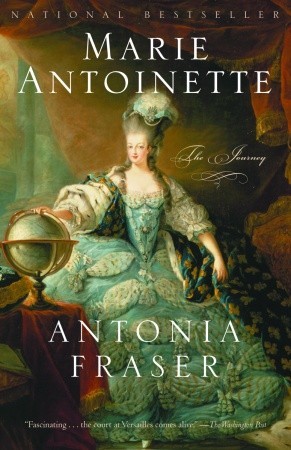 Because I've committed to only reading books from my own shelves until March, I've been really strict with myself and only allowed exceptions for books for my book group (of which I am the moderator, so I can't wiggle out of reading them).  This includes audiobooks -- I nearly always have one in progress in the car, because the radio in my area is just dire.  Since I only actually own audiobooks by Jane Austen, I'm forced to search my library's catalog for audiobook editions of books on my TBR shelves which can be challenging.  Not many audiobooks by Trollope in the library collection!

However, I did find one last, lone audio copy of Marie Antoinette: The Journey by Antonia Fraser, which has been on my nonfiction shelf for a couple of years (picked it up for a mere $1 at the Friends of the Library sale).  I've been really interested in historical biographies since I read and loved Catherine the Great by Robert K. Massie last year.  The story of Marie Antoinette really intrigued me since Massie mentions how shocked Catherine was at the death of MA during the French Revolution (hopefully, that isn't a spoiler for anyone!).

Before I began this book, I knew next to nothing about her life, except that she lost hear head during the French Revolution and her infamous line, "Let them eat cake," (which she never actually said -- that line had been attributed to a lot of disliked princesses years before she'd ever married Louis).   I didn't know much about the history of France or the Revolution either.

So, this is Marie's life story, beginning with her childhood as one of EIGHTEEN children borne by Maria Theresa, the Hapsburg Empress of Austria.  Marie's marriage to the Dauphin Louis, the future King Louis XVII of France, was merely a political move by the Hapsburgs to try and solidify an alliance with France.  The Austrians hoped that Marie would someday be able to influence the French to their advantage, but basically, this set up young Marie for failure for the rest of her life.

She was married at 14 to Louis, who was shy and indecisive, which set HIM up for failure as a King, given the historic circumstances of his reign.  They weren't bad people, just mediocre rulers at a time when the wealthy excesses of the royals at a time when common people were demanding more rights and equality, taxes were high and finally, bad weather and poor harvests drove food prices sky-high.  A war with Austro-Hungary was the last straw.  The French people essentially never forgave Marie for being Austrian, and made her the scapegoat for everything -- she was just crucified in the press and libeled for being spendthrift, a lesbian, promiscuous, and manipulative, most of which wasn't true.  She was pretty much doomed from the start.  I'm sure Marie Antoinette wasn't perfect, but her life was pretty tragic.  She certainly didn't deserve execution.

This book was very well-written and interesting, but since I don't know that much about the history of France and the Revolution, I can't compare it to anything else.  I'm not sure if Marie was really just misunderstood or if Fraser is leaving out anything negative about Marie.  I'm going to have to read more about French history to get another side of the story.  The basic facts behind the Revolution are mostly mentioned in passing, only in relation to what happens to Marie.  I wish Fraser had included more of that background, it was so focused on how it really related to the royal family.  The rest of France seems to be glossed over.

However, this book was extremely enjoyable, and I listened to it almost on audio because of the excellent narration by Donada Peters.  Normally, when I have an audiobook, I read ahead in the print copy, to make it go faster.  Peters' posh accent and beautiful pronunciation of all the French names was so good that reading it myself just didn't do the narration justice, no matter how I tried to imagine her voice in my head (does anyone else do that?).  So I listened to nearly the entire story, which is rare for me, especially since this book was more than 20 hours of audio on 17 discs -- it took me about five weeks, and I'm normally not that patient.

I'm currently taking a break from France for a bit, but I think after this I'm going to revisit France and read The Debacle by Emile Zola, his best-selling novel from about the Franco-Prussian War.  What other books about France should I read?  And which other royal biographies do you recommend?
Posted by Karen K. at 4:40 PM