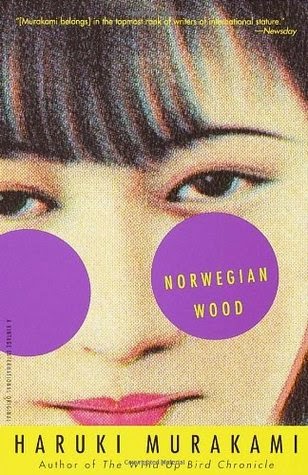 With less than a month until the end of Adam's 2014 TBR Pile Challenge, I still had three books left to finish.  I nearly gave up with more than 1000 combined pages to read by the end of December, but decided I there was still enough time to give it a final shot.  I chose Norwegian Wood as my first read because, quite honestly, it was the shortest of the three and I thought I could knock it out fairly quickly.

Norwegian Wood is a coming-of-age story about a young Japanese man, Toru Watanabe.  The story begins with a prologue of Toru in middle age as he suddenly relives a memory of an old girlfriend which is triggered by hearing the Beatles song "Norwegian Wood."  We flash back to the late 1960s, and learn about his troubled history with the beautiful and fragile Naoko, whom he'd originally met when Naoko was the girlfriend of Toru's childhood best friend Kizuki, who committed suicide when they were all 17.  Now in college, Toru and Naoko had rekindled their friendship after a chance meeting.

The book follows the evolution of their friendship to the beginnings of a romance, but the course of true love never does run smoothly, and without spoiling too much, I'll just say that the couple is separated.  Toru is trying to hang on to his relationship with Naoka, but meanwhile he meets another girl Midori.  Toru is also influenced by an older student, Nagasawa, who is brilliant but something of a cold-hearted playboy, though he has a long-suffering girlfriend.   Basically, the story examines Toru's maturing as he struggles to reconcile his feelings for the two women and starts making decisions about how to live his life.

Overall, I liked Norwegian Wood, but I can't really say I loved it.  I do think the writing was excellent and insightful, and I loved reading a the descriptions of Japan, especially about everyday life.  However, there were some aspects of the book that made me sort of uncomfortable, especially how the female characters were depicted. There's a lot of discussion about their sex lives which tended to go into way more detail than I needed to know, plus I think it was kind of sexist.  I understand that it's told from a young man's point of view and it is his coming-of-age story, but I really feel like the female characters were essentially a man's fantasy about what young women should be like.  I know it's a completely different culture and I shouldn't expect women of a different generation to fulfill my expectations, but it still bothered me.

Norwegian Wood was incredibly popular in Japan and has sold millions of copies all over the world, and made the author into a literary superstar.  I bought this book more than 10 years ago, when I was living in Japan at Yokota Air Force Base, in Fussa-shi, a suburb of Tokyo.  I think I bought it because I wanted to learn more about Japanese culture, but I'm not sure why I never got around to reading it while I was there.  I really wish I had because there are a lot of mentions of places in and around Tokyo that I've actually visited, and quite a few that I wish I'd seen. I think I would have gotten a lot more out of the Japanese culture depicted if I'd read it while I was actually in Japan.

I also really wish I knew someone else who'd read it so I could have a real discussion about it.  I do think this would be a really great book for a discussion -- this would be great for a read along, or a book group.  I haven't included too many details because I hate giving away too many plot details.

I don't think Norwegian Wood will be one of my favorite reads of the year, but I'm very glad I read it and now I'm curious to read more by Murakami and possibly other Japanese writers.  I still have an unread copy of Snow Country by Yasunari Kawabata which is a Japanese classic that I hope to read next year.
Posted by Karen K. at 10:35 PM