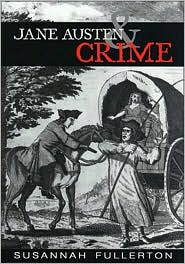 "Crime became a part of her plots, crime revealed character, crime emphasized duty and responsibility, and crime even united some of the heroines with the heroes."

For five of the past six years, I have been lucky enough to attend the Annual General Meeting of the Jane Austen Society of North America (also known as the JASNA AGM). Every year, hundreds of Jane Austen fans gather in a large hotel and discuss all things Jane Austen, from academic analyses to pop culture phenomena. There are costumes, dancing, lectures, discussions, and it's great fun if you're a literature geek like myself.

Every year, I buy at least one book from one of the vendors that provide the retail therapy at the convention, usually from the wonderful Jane Austen Books -- if a book exists with any connection to Jane Austen, they probably sell it.  At my very first AGM, in 2009, I purchased Jane Austen and Crime by Susannah Fullerton, which examines how crime relates to Jane Austen's fiction and how it would have affected her personally during her lifetime. True crime and Jane Austen -- what is not to like?

Jane Austen lived from 1775 to 1817, during the Georgian and Regency periods.  Life was pretty brutal back then -- if caught, criminals could get the death penalty for offenses as minor as setting straw on fire or cutting down a tree.  Austen's own aunt was arrested for supposedly shoplifting some lace, and spent months in jail before she was finally acquitted, and Austen herself actually visited her aunt in jail.  Austen's own works are full of crimes, though some are not immediately obvious to the reader.  In this book, Fullerton examines actual crimes of the period and how they relate to the novels.    As a fan of history, Jane Austen, and crime writing, this was a literary triple threat. The book includes sections about crimes against life; crimes against property; crimes of passion (including adultery and elopement); social crimes (like dueling, smuggling, gaming, and poaching); gothic crime (regarding the gothic novels so fascinating to readers of the time period, including Jane Austen herself); and punishment and the law.

This book isn't long, but it did take a while to finish. Sometimes I find that history books are just packed so full of facts that I can only read so much at a time. This book has only 218 pages of text, but it took me about ten days to finish it (and of course I'm also juggling other reads as well).  I did learn lots of interesting facts, including the following: 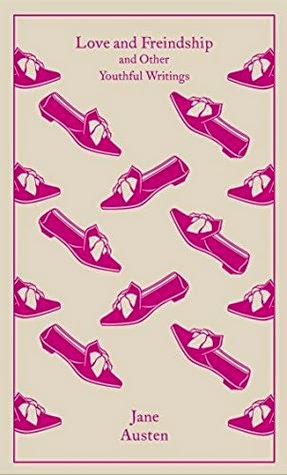 I'm always looking for a good reason to buy another Penguin Clothbound Classic.

So that's one more book crossed off my TBR Pile Challenge list!  I'm halfway finished and it's only April, so I should have no trouble finishing the list by the end of the year.  How's everyone else doing with the TBR Pile Challenge?  And which other nonfiction books about Jane Austen or the Regency period do you recommend?
Posted by Karen K. at 9:49 AM