The Return of the Native by Thomas Hardy 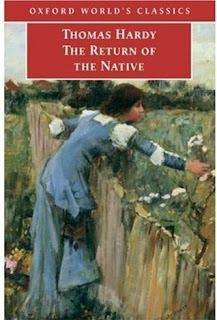 So, basically, since I read and LOVED Far From the Madding Crowd, I am officially no longer afraid of Thomas Hardy. And since Amanda from The Zen Leaf had told me a kazillion times that The Return of the Native was her favorite Hardy, and that there was a wonderful audiobook version narrated by . . . wait for it . . . ALAN RICKMAN (be still, my heart!) I gave it a try. (Also because it was one of a dozen or so books left on my Classics Club list.)

Seriously, Alan Rickman could read the telephone book and I would listen. In fact, the first chapter is kind of pastoral and descriptive, and nothing actually happens, but I just listened to his delicious voice read. Which was just fine.

But I digress. This is one of Hardy's earliest novels, and it's essentially a love quadrangle about three men and two women and who's going to end up with whom, and how many lives are messed up in the interim. Or, as Amanda put it so succinctly, "an 1800s soap opera set on Egdon Heath." Let's see. Thomasin Yeobright is about to marry Damon Wildeve, but due to a problem with the marriage license, the wedding doesn't go through as planned and she's horribly embarrassed. And her aunt objected to the marriage anyway. Then Damon is having second thoughts, because his old flame Eustacia Vye cannot stand being second fiddle to anyone, so she's trying to get her hooks back into him, and he's waffling. Meanwhile, Diggory Venn in love with Thomasin, and tells her aunt he still wants to marry her, even though she turned him down a couple of years ago.

And here comes Clym Yeobright, Thomasin's cousin. He had a good job in Paris but has given it up and now Eustacia thinks she might go after him instead because he's sophisticated and lived in Paris. She wants out of Egdon pretty badly. Basically, Eustacia is an 1840s Scarlett O'Hara, but more selfish, if you can imagine, and not so much willing to sacrifice everything for the sake of the farm. Meanwhile, Diggory Venn is waiting and watching everyone. He is the moral center of the book.

Meanwhile, there is are a bunch of side characters who are alternately rustic, amusing, and just as dumb as soup. They exist for comic relief, and some parts of this book are just laugh-out-loud funny. Some parts made me yell at the audiobook (in the car, which is a good thing -- very embarrassing otherwise!) -- and some parts are slightly ridiculous. But Hardy really is an amazing writer, with great character development and amazing descriptions. If I had read the print book instead of listening to the awesomeness that is Alan Rickman, I would actually have found a brilliant and insightful example and included it.

Overall, I have to agree with Amanda -- it's really a great book, with some serious melodrama, though unlike Amanda, I absolutely disliked Eustacia and was waiting to see if she would get her comeuppance. I had some suspicions about how it would all shake out, and I was not disappointed, though there are some pretty good plot twists. I don't know if I liked this book quite as much as Far From the Madding Crowd, but I'm on a roll with Hardy and I have two of his shorter novels on the TBR shelf which I'd like to attempt this year: A Pair of Blue Eyes and Under the Greenwood Tree. Has anyone read either of them? Which do you recommend?

Unfortunately, I can't count this for the Back to the Classics Challenge since I finished it at the very end of 2015, but it's one more book crossed off on my Classics Club list! Only eleven books left!
Posted by Karen K. at 9:50 AM