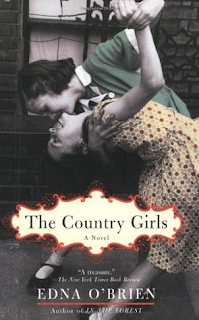 Last summer I was lucky enough to visit Paris, which is only a three-hour train ride from our new home in southwest Germany. Of course we had to visit the famous Shakespeare and Company bookstore which is on the Seine, just across from the Notre Dame Cathedral. Not only do they have a great selection of books -- all in English -- they also have a tiny collectible bookstore, and tables out front with some used books as well. One of my finds was The Country Girls Trilogy and Epilogue  by Edna O'Brien, which I chose as my 20th Century Classic selection for the Back to the Classics Challenge.

This book is actually a omnibus of three novellas: The Country Girls (1960); The Girl With Green Eyes (also known as The Lonely Girl) (1962); and Girls in Their Married Bliss (1964). The edition I read also includes the epilogue that O'Brien added in 1986. It's the two story of two young women, Caithleen and Barbara, growing up in the early 1960s. The girls are childhood best friends in a small town in western Ireland. Eventually, they move to Dublin and ultimately to London.

The first two books are narrated by Caithleen, also known as Kate. In the first volume, Kate is a rather poor, bookish girl, sweet, but dominated by her more assertive friend Barbara (also known as Baba). Baba's dad is the local veterinarian so they have a pretty comfortable life, but Kate's father is a heavy drinker and they are struggling to hold on to the family farm which is heavily mortgaged. Kate gets a scholarship to a convent school, and Baba attends as well (though she makes it clear she is NOT on a scholarship). It's mostly the story of their teenage years adjusting to the convent school, girlhood crushes, and friendships. Baba is the more dominant in the relationship and the way she treated Kate sometimes made me really uncomfortable, but ultimately, Baba and Kate are always there for one another.

In the second volume, The Girl with Green Eyes, the girls have moved to Dublin, and Baba is mostly in the background as Kate is navigating her first real love affair with an older man, to the displeasure of her relatives and all the people back home who decide to get involved. It was appalling to me how these outsiders felt they had a right to interfere. I've never lived in small town but I can't imagine everyone knowing my business.

The third volume alternates between the third person story of Kate, and Baba's story, told in her own voice. Baba's narration is darkly funny but ultimately, I found this book really sad. As late as the 1960s, women in Ireland (and England) had so few rights, it was infuriating. The book is well-written and the characters really came alive for me, but it was quite depressing. There were a few funny moments but parts are quite heartbreaking.

I'm counting this as my Classic Set in a Place I'd Like to Visit (Ireland) for the Back to the Classics Challenge and also my first book for the European Reading Challenge 2017.
Posted by Karen K. at 4:51 AM