The Prettiest Town in Alsace-Lorraine 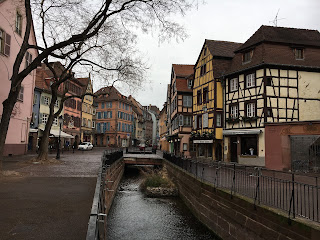 A few weeks ago there was a school holiday and I had cabin fever, so my daughter and I took a little road trip to Colmar, France, which is about 2 1/2 hours away, over the border in Alsace-Lorraine. It's about an hour south of Strasbourg. I'd heard it was the prettiest town in the world and was the model for Belle's village in Disney's animated Beauty and the Beast. 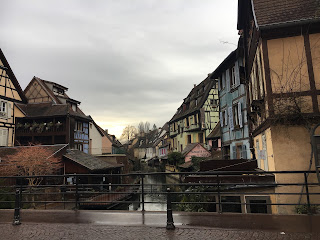 I was able to get a good rate on one night in a hotel so we left on Sunday and got there just in time for dinner. Our hotel was adorably cute. 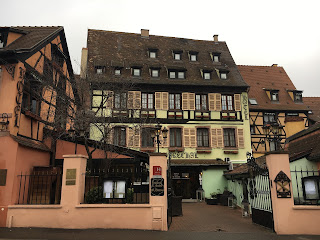 As I was driving, I passed a lot of vineyards and shops that advertised foie gras, which is a regional specialty. There's some really amazing food in Alsace and our hotel had a really good restaurant. We treated ourselves to a nice dinner. (Yes, my teenaged daughter will eat foie gras which is goose liver.) 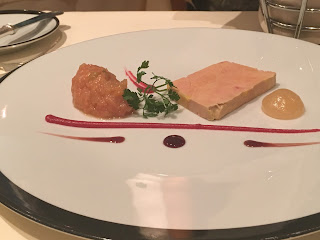 That's the half-sized appetizer portion which is served with brioche and lovely breads. It's incredibly rich and we were barely able to finish it and our entrees as well, which were not large by American standards. Also I forgot that French restaurants include the service charge in the bill so I needn't have rushed downstairs at 10 p.m. to give them a tip which I realized I'd forgotten. At least I wasn't wearing a baseball cap and fanny pack.

And I found out the next day the reason our hotel room was so cheap was because everything in Colmar is closed on Mondays during the off-season. Except restaurants and museums, which I didn't visit because I was with a teenager.

Nevertheless, we walked around for a couple of hours until it was time for lunch. Even in winter, it's really cute. Many of the buildings date from the 1600s and even earlier. 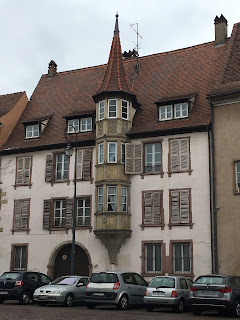 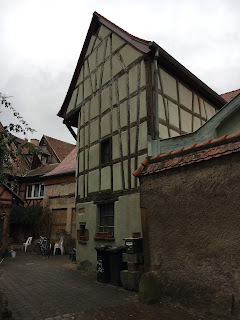 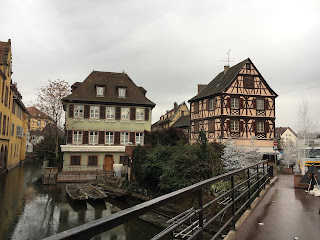 It's called Little Venice because there's a canal that runs right through town. I think it's only about two feet deep and apparently you can take boat rides. Didn't see anyone boating that day but it must be stunning in the summer. 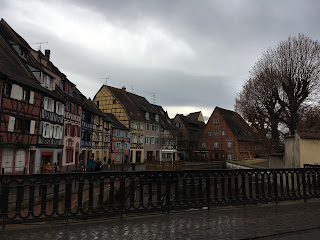 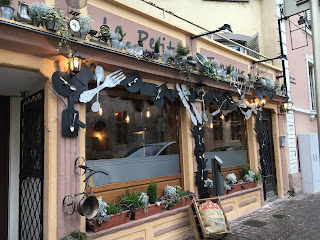 Basically the only places open were food-related. We wanted to eat at this restaurant but it didn't open until noon and we were starving, so we found a little cafe and the ultimate comfort food for a cold morning. 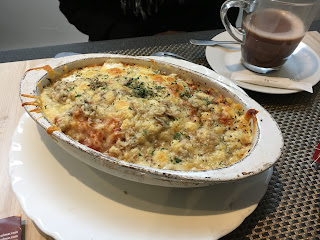 This is called tartiflette and it's very popular. Basically, it's a casserole with potatoes, cheese and cream, with various add-ins. Ours had mushrooms and it was the perfect thing for a dreary, chilly day. The two of us could not finish it. 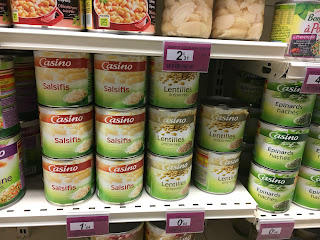 Thus sustained, we shopped at the only stores open: the foie gras store (yes, there is such a thing) and the grocery store. As you'd expect, even the grocery stores are better in France. Even the canned goods are classy. I've never had salsify but apparently it's a root vegetable. 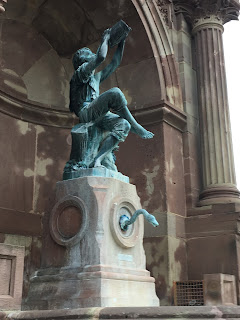 There are lots of charming architectural details everywhere. This is a fountain outside the covered market, which dates from 1865. Closed on Monday, of course. 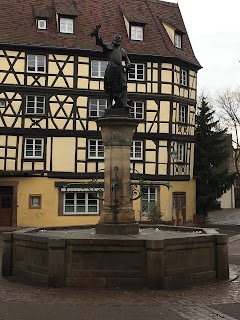 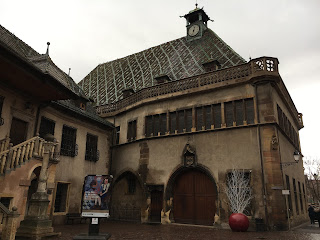 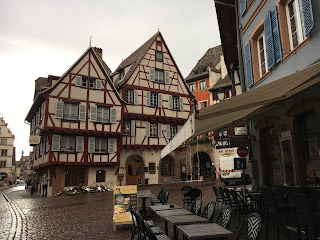 Basically, this adorably cute town is a tourist magnet and has tons of restaurants, so there's great food and scenery. Even if you don't want French food, you can find something else to eat. 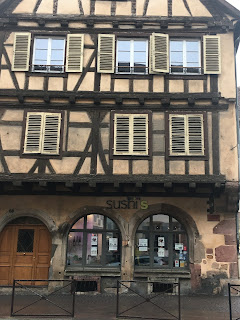 Yes, that is a sushi restaurant. I think I saw Indian and Mexican food as well.

I really want to go back and spend more time here -- on a day when there are more shops open, and I have time to visit all the historical things I missed.
Posted by Karen K. at 5:12 AM