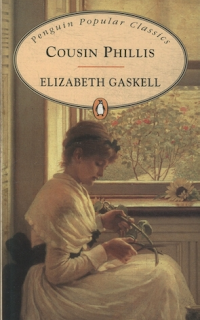 My cousin Phillis was like a rose that had come to full bloom on the sunny side of a lonely house, sheltered from storms. I have read in some book of poetry,—

A maid whom there were none to praise, And very few to love.

And somehow those lines always reminded me of Phillis; yet they were not true of her either. I never heard her praised; and out of her own household there were very few to love her; but though no one spoke out their approbation, she always did right in her parents' eyes out of her natural simple goodness and wisdom.

I was happy to find this novella on audiobook available for digital download at my library. I thought I'd read nearly everything by Elizabeth Gaskell but apparently not! Published in 1864, this is one of Gaskell's lesser-known works and I think that's a shame, because I really enjoyed it.

The book's narrator, Paul Manning, is nineteen and working on the railways as an apprentice engineer. While on an assignment in Cheshire, he learns that he has cousins from his mother's side living nearby, and begins to visit them: the Reverend Holman, a pleasant clergyman-farmer; his devoted wife, and their daughter, Phillis, who is sixteen but is tall, pretty, and intelligent. They all become very fond of each other and are his surrogate home-away-from-home, spending weekends and holidays with the Holmans when it's too far to visit his own family back in Birmingham.

Reverend Holman works hard as both a farmer and minister, and has a constant curiosity about the world that he's passed on to his daughter. Phillis is tall and beautiful, well out of Paul's league, but he loves her as his own sister. Eventually, Paul brings his best friend and railway supervisor, Edward Holdsworth, to meet the Holmans. Holdsworth is handsome, educated, and well-traveled, and as expected, a sort of love triangle ensues and there is heartbreak.

This is a lovely, bittersweet novel, and Gaskell expertly describes life on the Holman farm which sounds absolutely idyllic, though it must have been isolating for a bright girl like Phillis. Gaskell also creates really well-defined characters that felt incredibly real, and several times I found myself yelling out loud at them. I also really liked that young Paul was the narrator -- I think she did a great job creating his voice.

My one quibble with the novella was the ending, which I found rather abrupt. Gaskell went into so much detail with the rest of the story that I was surprised how quickly it ended. I did a little research and according to Wikipedia, the novel was first published as a series in four parts and there were two more parts originally planned. I can't find any other sources to back this up but that would explain why it felt unfinished. It's also the work published just before Wives & Daughters, my favorite among her novels, and I think the writing style is quite similar compared to her earlier works which I find a bit harder to read. It's another side to her works which I really liked having read most of her major novels.
Posted by Karen K. at 4:24 AM