The Wine of Solitude by Irene Nemirovsky 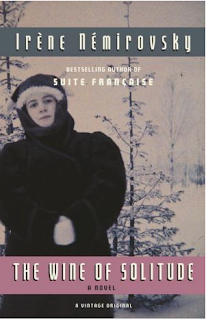 She loved studying and books, the way other people love wine for its power to make you forget. What else did she have? She in a deserted, silent house. The sound of her own footsteps in the empty rooms, the silence of the cold streets beyond the closed windows, the rain and snow, the early darkness, the green lamp beside her that burned throughout the long evenings and which she watched for hours on end until its light began to waver before her weary eyes; this was the setting for her life.

After her unpublished novel Suite Francaise was discovered in the early 2000s, many of Irene Nemirovsky's works were republished. I've read five of her books so far, and am so glad that they are getting the attention they deserve, because I've loved every one of them so far. My latest Nemirovsky read, The Wine of Solitude, is her most autobiographical work and was originally published in 1935.

Born in the Ukraine in 1903, Helene Karol is a lonely child, ignored by her vain and shallow mother, and loved but dismissed by her absent father. After losing a job, he leaves the family for two years to manage a Siberian gold mine and winds up making a fortune in speculating. Gambling is his passion, whether it's the stock market or the roulette table. The only one who truly seems to love and care about her is her governess, Mademoiselle Rose. As Helene grows up, she sees how her father's gambling and her mother's infidelities are destroying them. She becomes a keen and sometimes reckless observer of the dynamic between her parents and her mother's younger cousin and lover, Max, who basically lives with them.

She stopped, twiddled the pencil round in her hand and a cruel, shy smile spread across her face. It made her feel better to write these things down. No one paid any attention to her or cared about her. She could amuse herself in any way she pleased; she continued writing, barely pressing down on the pencil, but with a strange rapidity and dexterity she had never experienced before, an agility of thought that made her aware of what she was writing and what was taking shape in her mind simultaneously, so they suddenly coincided.

The family moves back and forth between Ukraine, France, Russia, then flee to Finland during the Russian Revolution. During the 1920s they return to Paris where things finally come to a tragic climax and Helene is forced to make a decision about her future. There are a lot of terrible mothers in Nemirovsky's works and if her childhood was anything like Helene's, I can understand why.

This is book was both sad and beautifully written, and I really liked it. So far my favorites of her books are Suite Francaise and her excellent short story collection, Dimanche and Other Stories. I do want to read the rest of her works and fortunately most of them are available through Overdrive from my library's online catalog. There's also another short story collection that was published last year called In Confidence and it's available from Raglan Books, an independent publisher in Ireland and I've just ordered it. I was really trying to cut back on my book purchases this year but already I'm failing miserably.

I'm counting this as for my Classic in Translation for the Back to the Classics Challenge, and as my Ukrainian read for the European Reading Challenge.
Posted by Karen K. at 4:50 AM