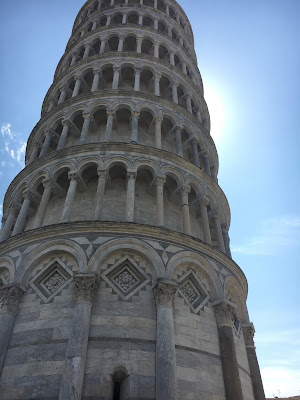 A couple of weeks ago it was spring break for the high school. My daughter is not as enamored of travel as I am, but I told her she could pick any place she wanted to go in Europe, and she wanted to go back to Italy.  You can find really cheap flights from Frankfurt to Pisa (the flight is just over an hour!) so we booked a round-trip and planned a trip: one night in Pisa, four nights in in Florence, and three nights in Siena.

We arrived in Pisa in the afternoon, and our first stop was lunch: 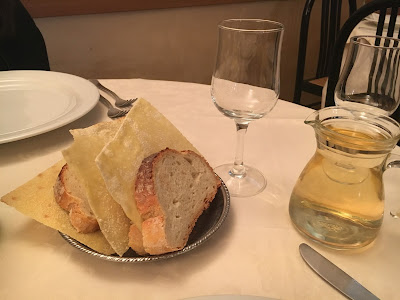 Even the bread baskets are classier in Italy. Note the nice little pitcher of house Vino Bianco. 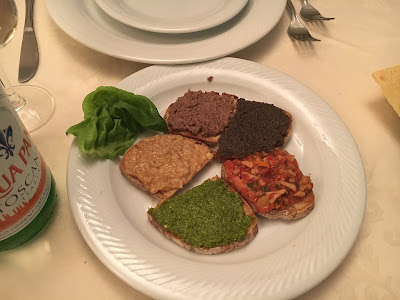 Crostini are on almost every menu in Tuscany. This assortment included pesto, black olive, chicken liver (I've forgotten exactly what the others were. Tomato and mushroom? Onion? I have no idea, but they were delicious.) We had crostini almost every day with lunch AND dinner. 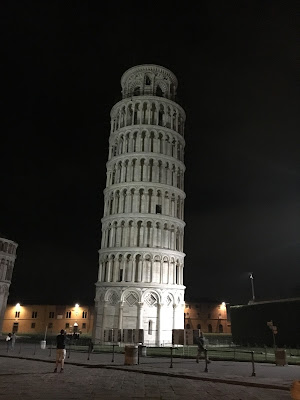 After a long nap, we walked around and had dinner and did a little sightseeing and shopping. Of course the most famous thing in Pisa is the leaning tower, which looks amazing at night. 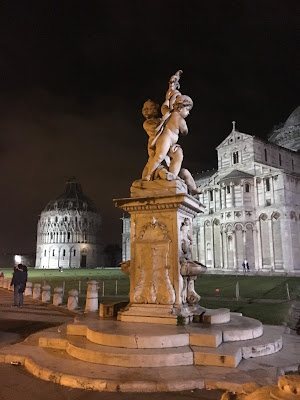 There are a lot of beautiful buildings around it that are beautifully lit,
plus this statue of cherubs fighting over something. 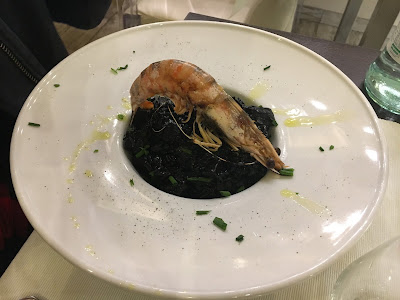 We both had risotto for dinner. I don't remember what was in mine, but my daughter is an adventurous eater and ordered the squid ink risotto which had seafood in it.
It made her teeth look like she'd been eating in a coal mine. 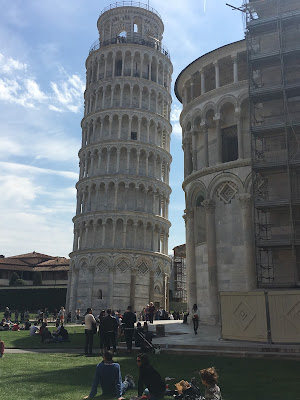 The next morning we went back to the tower and were able to buy tickets to climb to the top. It was closed for renovation a while back but now they allow a limited number of tourists up at any given time. They're very strict about how many people can go up at once and you're not even allowed to bring a purse or any sort of bag, which has to go in a free locker. I imagine it's to keep the weight down and keep it from leaning even further though it could be for security (which was more extensive here than any other site I visited on this trip to Italy). 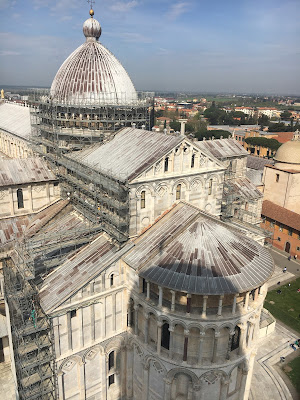 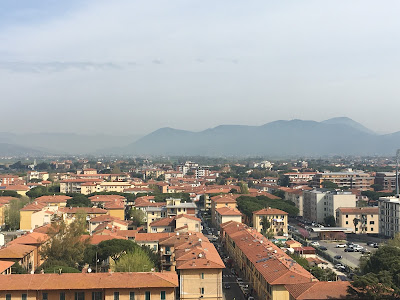 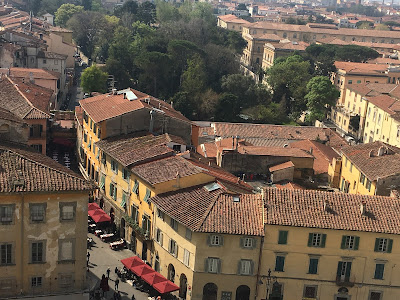 There are columns all the way around and if you look closely, every one is different. 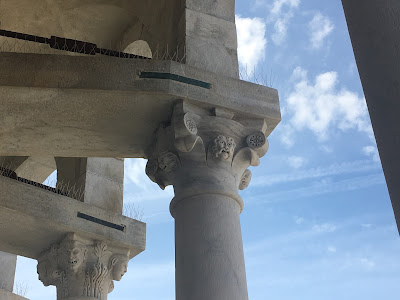 The tower or campanile of Pisa is actually only part of the Piazza dei Miracoli, which includes a cathedral, a baptistry, and a walled cemetery with frescoes. The grounds are pretty big and there are some sculptures, including this fallen angel, which is modern. 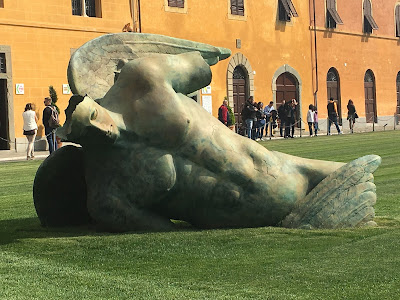 Our combined ticket included all the buildings and we went into the Baptistry which is acoustically perfect, though you're not allowed to shout and test it out. I did find this embedded in the floor: 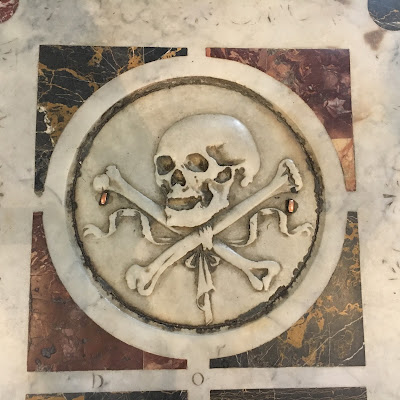 Pretty sure this has nothing to do with pirates, it's some kind of tombstone.

Afterward we walked around Pisa for lunch and shopping. The window displays in Italy are pretty fabulous. 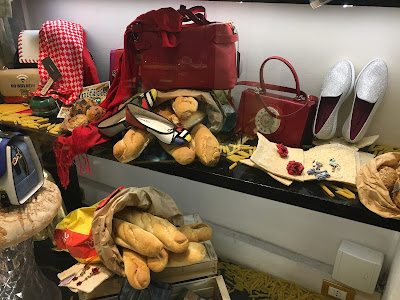 There's no escaping the carbohydrates in Italy, not even when you're shoe shopping.

We also found a good-sized bookstore and as always, asked if they had any books in English. We were directed to the back of the store which actually kind of a terrace. 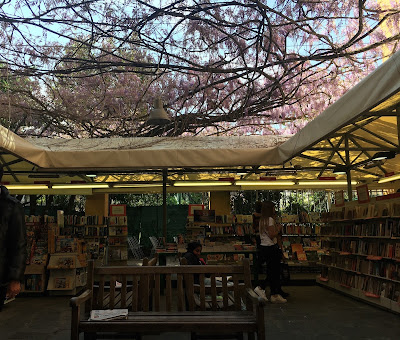 The photo is a little dark, but you can see the wisteria vines growing over the top and the smell was amazing. (No idea what they do with the books when it's raining.) They also had a pretty good selection; overall, I was really impressed with the number of bookshops in Italy.

We also passed a covered market area where there were a lot of used books for sale. All of them were in Italian but I did spot these: 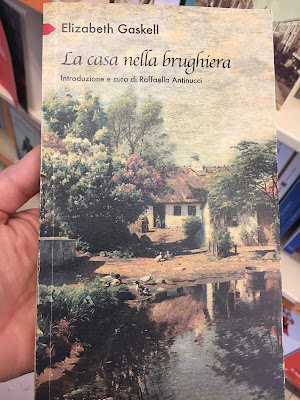 That's an Italian translation of Moorland Cottage by Elizabeth Gaskell 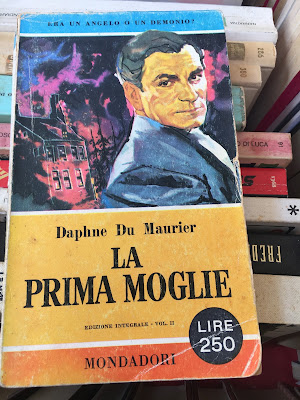 And here's an Italian copy of Rebecca. Based on the artwork, I'm guessing it's from the 1970s -- so dramatic! I'm sorry now that I didn't buy it, and it reminds me it might be time for another blog post about Awful Book Covers -- but only after I get caught up with my travel posts! I'll post more photos of Florence and Siena in the next couple of weeks.
Posted by Karen K. at 7:53 AM