Part 2 of my Italian vacation -- on to Florence, where we spent four days, filled with art, gelato, and climbing hundreds of steps (therefore justifying all the gelato, of course). 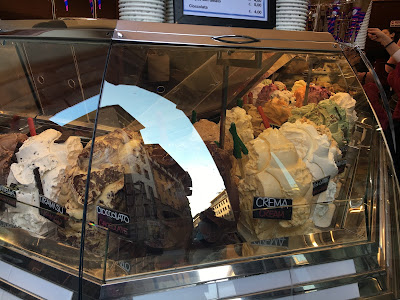 I took this photo just off the Ponte Vecchio. I like how the buildings are reflected next to the gelati.

We had mostly good weather, except for the first day when it was scary and overcast just as we were about to climb the Campanile, or tower, in the main square by the Duomo. (We had to make a reservation to climb the Duomo another day). Naturally, it started to rain (with thunder AND lightning) when we reached the top of the tower. It made for some good photos, but it was a little scary. 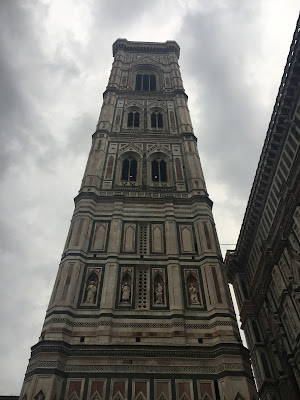 Not the tallest tower, but the best views in Florence.

Like the tower in Pisa, there are several different levels where you can stop and admire the view, plus catch your breath, so the climb wasn't as difficult as I thought. Plus, I think I'm much more used to walking stairs and hills than my last trip to Italy; living in a four-story house, in a hilly neighborhood, you tend to get better at it.

That's the Piazza Vecchio in the foreground, and in the far left you can see Santa Croce (famously visited by Lucy Honeychurch in A Room with a View.) 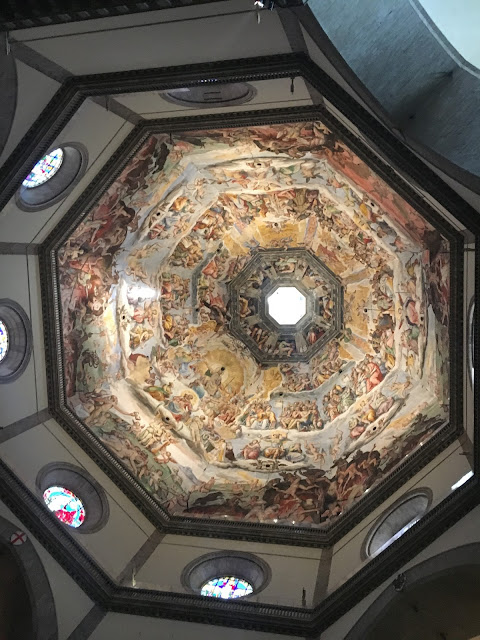 The next day I went inside the Duomo, which is surprisingly plain -- apparently they used up all the money and resources to decorate the outside. Inside the actual Dome it's quite elaborate, with all kinds of Biblical images, especially hellfire and damnation. 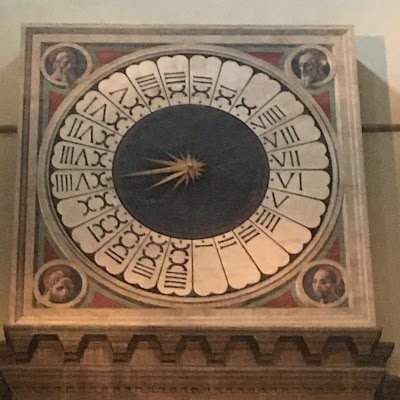 At the opposite end is this amazing clock, which is clearly not telling time how I learned it. Here's an explanation if you're curious.

We did climb the Duomo a couple of days later but it was less fun than the tower because it was really narrow and crowded, because people are climbing up and down the same staircases (some towers have designated up and down routes, in different stairwells. Also, the Duomo is the most beautiful thing in Florence, and obviously, you can't see it when you're inside. But the views of the countryside are pretty spectacular. 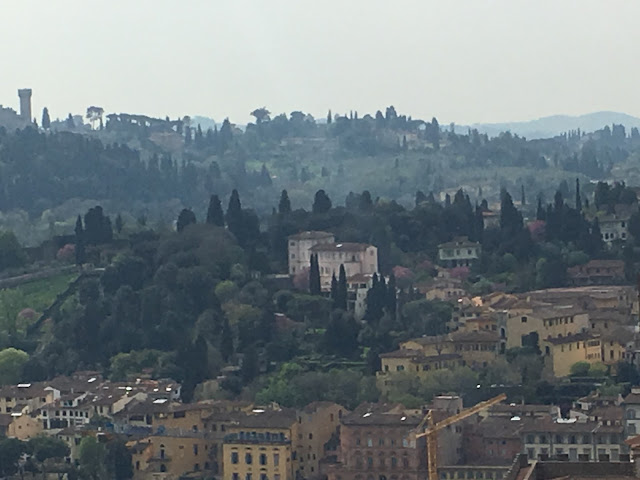 Naturally we had to visit a couple of museums. My daughter isn't a huge art fan but even she found David to be pretty impressive. 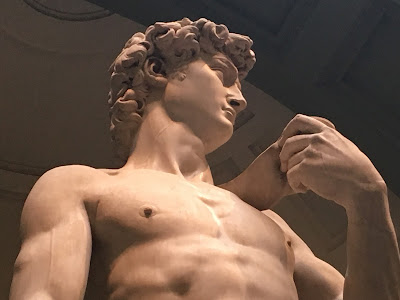 Her favorite thing was to take photos of statues and give them snarky captions on her snapchat account. I was able to save a couple of them. 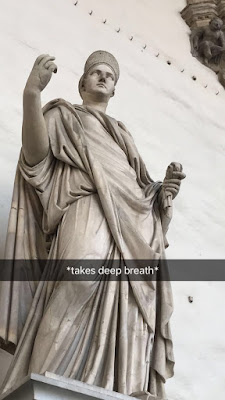 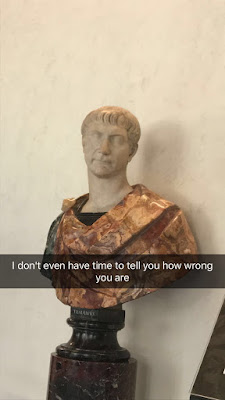 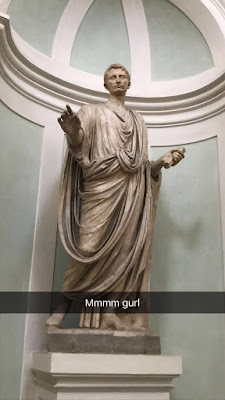 Aside from towers and museums, my other favorite place in Florence was the Boboli Garden, part of the Palazzo Pitti, the mansion of the Medici family on the opposite side of the Arno. It's a bit of a walk from our hotel but it was worth it. It's a huge, beautiful garden (supposedly the inspiration for the gardens of Versailles) and it's on a hill, so the view is amazing. 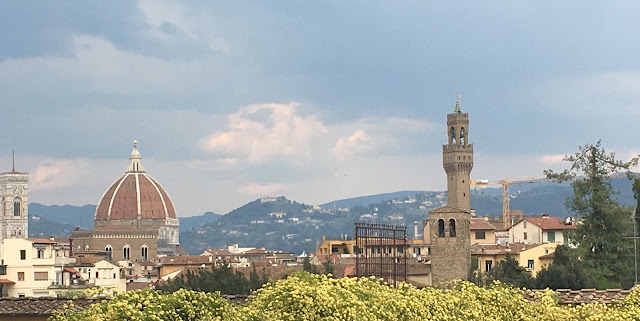 As you'd expect, the food was amazing. I am eternally grateful to have children who will eat just about anything. My daughter discovered she loved one of the local specialties which is crostini with chicken livers. We had crostini almost every day. 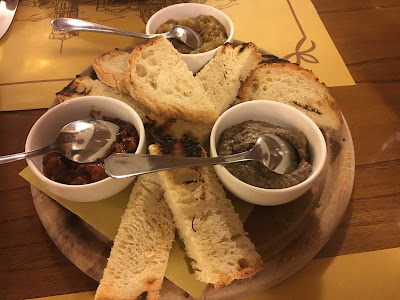 At this restaurant, it was more of a DIY crostini, but it was really good. 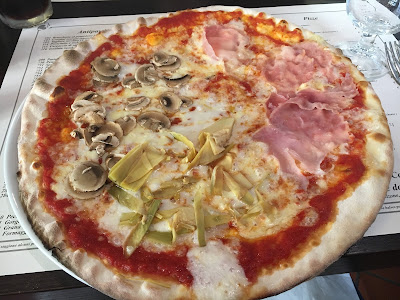 I only had pizza once the entire trip. It was pretty amazing. 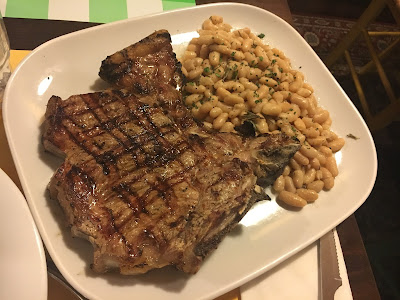 We also enjoyed the Florentine steak, which is served in a large piece by weight. The smallest we could get was 600 grams -- for you non-metric readers, that's about 1 1/3 pounds. We shared but it's still a big portion, especially if you've already been eating crostini. 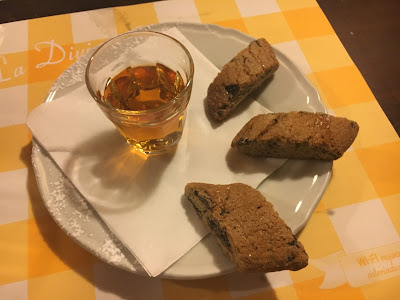 Nearly every restaurant in Florence has Vin Santo and Cantucci on the dessert menu. Vin Santo is a traditional sweet dessert wine and cantucci are twice-baked cookies that Americans call biscotti (technically, biscotti just means any cookie in Italian; cantucci are always twice-baked). These had chunks of chocolate baked into them and they were the best I had in Florence.

And finally, here's one of my favorite photos, a view of the Ponte Vecchio from the Uffizi Gallery: 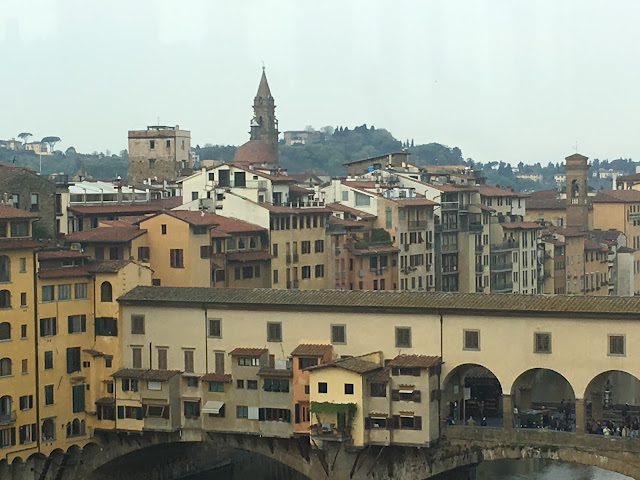 It was my second trip to Florence and I loved it just as much as the first time. Next up: Siena!
Posted by Karen K. at 3:49 AM