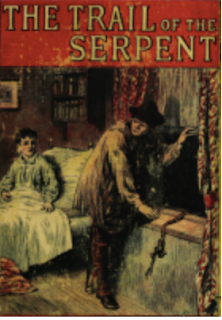 Since I started seriously exploring Victorian literature, I've made some unexpectedly delightful discoveries. One of my favorite surprises was Mary Elizabeth Braddon, a Victorian writer who is best known for her Victorian sensation fiction. Author of more than 80 novels, she's best known for Lady Audley's Secret, which I read several years ago for the RIP Readalong. When I saw that the library had her debut novel available as an e-book, I couldn't wait to download it.

First published in 1860 as Three Times Dead, Braddon reworked the novel and republished it in 1864 as The Trail of the Serpent. Basically, there are three intertwining plots. The first is the fate of Richard Marwood, a somewhat ne'er-do-well scamp who is trying to turn his life around, and is mistakenly accused of the brutal murder of his wealthy uncle. Following a verdict of not guilty by reason of insanity, he's sentenced to life in an asylum, while a sympathetic deaf police detective tries to prove his innocence and catch the real killer.

The second plot involves a psychopathic schoolteacher named Jabez North, who was fished out of the river as an orphaned baby. He believes he deserves better than working as a teacher in a second-rate boarding school and is merciless and diabolical.

The final plot is a wealthy Spanish heiress, Valerie de Cevennes, who lives in Paris and is secretly married to a star opera singer. A manipulative adventurer named Raymond de Marolles manipulates and blackmails Valerie, forcing her to become his wife and control her fortune. Eventually, all the threads tie up together into one super-dramatic plot.  There are swoons and fevers and poisonings and dopplegangers, and of course, lots of Big Secrets and dramatic reveals. 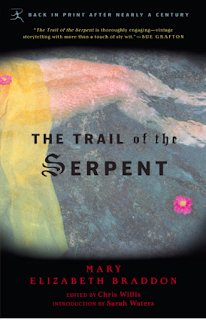 If this sounds really over top and melodramatic, well, it is. There's a lot of swooning and mustache-twirling, and I wouldn't call any of the characters well-developed. It's not so much a mystery of who the criminal is, but really how they did it and more importantly, will they get away with it?

Nevertheless, the plot is really great and it's a fun, fast read. It's one of the earliest British detective novels, published a full eight years (in its first incarnation) than The Moonstone by Wilkie Collins. And it always pleases me to realize that women authors in the 19th century were just as prolific as some of the men (which then leads me to wonder why the male authors are studied as canon, yet many of the works by women have fallen out of print and are largely forgotten). This is the Victorian equivalent of a vacation read and I really enjoyed it.

I'm counting this as my 400+ pages novel for the Victorian Reading Challenge and as my Classic by a Woman author for the Back to the Classics Challenge.
Posted by Karen K. at 12:31 AM