The Mystery of Edwin Drood: We Will Never Know Because It's Unfinished 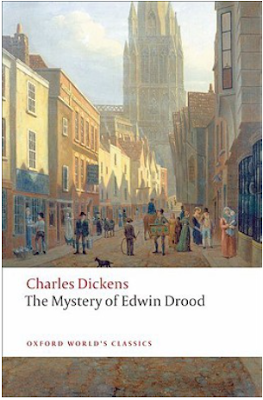 It's taken me more than ten years, but I've finally finished all the major works of Charles Dickens. I had put off reading his unfinished novel, The Mystery of Edwin Drood, because I suspected I'd be frustrated with only half the story. I'm not going to lie, I was absolutely correct, but if you're a Dickens fan it's still worth reading.

Published serially in 1870, Drood is the story of a young engaged couple, the eponymous Edwin, and Rosa Bud. Both orphans, they have been betrothed since children by their parents, who were friends and partners. However, Edwin and Rosa don't really love one another. At the beginning of the novel, Edwin is introduced to a brother and sister, Neville and Helena Landless, who are studying in the town of Cloisterham, where Rosa is attending school. Neville finds himself attracted to Rosa, and Edwin is attracted to Rosa. Neville is also offended that Edwin treats Rosa in an offhand manner, and after several drinks, heated words are exchanged. Neville thus gets a reputation as a hothead with a grudge. 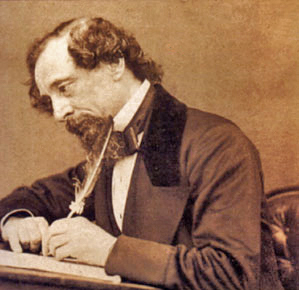 The two seem to make it up on Christmas Eve, but the following day, Edwin is nowhere to be found. Naturally, suspicion falls on Neville. Eventually, Edwin's watch, chain, and shirt pin are found in a river, but no body. (There is also a pointed reference to a quicklime pit). After several months, Rosa gets a visit from Edwin's creepy uncle Jasper, the Cloisterham choirmaster (and a secret opium addict). He confesses that he's been desperately in love with her for years. Rosa is naturally revulsed and flees to London, to her guardian, Mr. Grewgious, and meets up with the Landlesses again. We also meet some other characters who may or may not be private detectives or spies -- but that's pretty much it. Dickens only wrote half the novel before he suffered a stroke in June of 1870 (after working a full day on Drood). He never regained consciousness and there is no written outline of the story; however, Dickens had discussed the novel with various people so it is generally believed that (highlight for spoiler) Uncle Jasper is indeed the murderer.

Having read many mysteries, (including Dickens' masterpiece Bleak House, one of my all-time favorite novels) I had my own suspicions about the real murderer. Since the fragment was published there have been various film and TV adaptations, most recently in 2012, and a musical.

I really liked this story, though it had been some time since I'd read Dickens, I'd forgotten how different his writing style is to Trollope and Hardy. He definitely tends toward more flowery descriptions and over-the-top, eccentric side characters (with particularly descriptive names); and as usual, the young ingenue Rosa has essentially no personality except she's so pretty, men fall in love with her at the drop of a hat (except Edwin, of course). Written just a few years after Our Mutual Friend, I'm sure this would have been among my favorite Dickens novels if it had been finished -- I felt like the story was just starting to get really good when it was sadly over. I'm not sure how the TV adaptations conclude the story but I've requested the 2012 miniseries from the library.

I was thinking about counting this as my Classic Crime novel for the Back to the Classics challenge -- my final category for the challenge. However, I'm a little torn because I don't know how the story is resolved or if there's a crime at all -- what if Edwin just took off or got hit on the head and is supposed to reappear at the end with amnesia? Or if it was just an accident? Bloggers, what do you think?
Posted by Karen K. at 7:52 AM