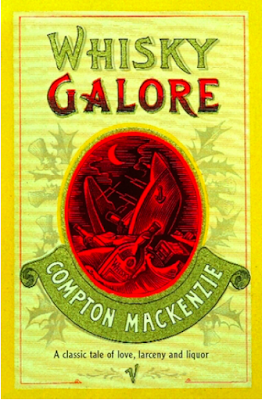 I was delighted by the most recent Classics Club Spin selection. I had been actually hoping to visit Scotland this summer (after my trip to London to see Hamilton) but since we decided to visit Jane Austen country, reading Whisky Galore by Compton Mackenzie would have to suffice for my Scotland fix. It includes so many of my favorite bookish requirements: Mid-century -- Check! Scotland location -- check! Quirky characters -- check! I am sorry to say most of what I know about Scotland comes from reading and watching Outlander (which I realize was written by an American). This has a lot more drinking and a lot less kilts and steamy Scotsmen -- and no time-travel.

The setup: loosely based on actual events of the 1940s, this comic novel is set during WWII and is the story of the residents of Little Todday and Great Todday, two fictional islands in the Outer Hebrides. Of course there is rationing due to the war, but what hits everyone hardest is the lack of whisky -- as the story begins there hasn't been any Scotch for weeks, and everyone is rationed to one beer every other day. They are all miserable.

The tale opens with the return of Sergeant Odd, a forty-something English solider who had been previously assigned to the island, and fallen in love with a local girl, Peggy Macroon, before he shipped off to Africa. He's ready to get married but her father keeps putting off the wedding. The locals tell him they can't possibly host a reiteach, a traditional Gaelic engagement party, when there's no whisky to be had. The first third of the book mostly deals with Odd visiting various locals so the reader is introduced to the various quirky locals. 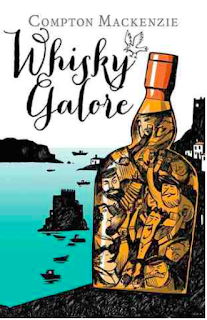 Finally, a miracle occurs -- a steamer called the Cabinet Minster is wrecked on a reef between the two islands, and it seems like manna from heaven when the locals realize the hold was filled with 15,000 cases of premium whisky bound for the United States (apparently much of the whisky has been diverted to sell to America to pay for the war effort -- it's not clear if the Americans have entered the war yet). The shipping company writes off the loss and the residents get busy salvaging what they can before the excise men arrive, and the engagement party is back on.

Hilarity ensues when the resident self-important gentry, Captain Wagget, decides that everyone is flaunting the law (and enjoying themselves), so he tries to get the police and military involved. There are also some really funny bits with the local school master, George Campbell, whose domineering mother is trying to prevent his engagement.

I really enjoyed this book. I do think it started out a bit slow, and I had a little trouble with Gaelic references and some of the dialect written phonetically into the dialogue. It's not what I'd describe as a rip-roaring yarn but more of a simmer -- perhaps I would have enjoyed it more if I'd been sipping a wee dram myself while I'd been reading it! It was definitely worth sticking with. I feel like I got a real flavor of the islands, so to speak, and I enjoyed all the colorful characters. I really wish now that I had been able to visit Scotland this summer.

There have been two film adaptations of Whisky Galore -- the first one from 1949 starred Gordon Jackson (Hudson from Upstairs, Downstairs) as Mr. Campbell and is a classic comedy from the British Ealing studios.  The 2016 remake stars Eddie Izzard as Captain Wagget which I think is brilliant -- I love his stand-up and he's wonderful in almost every film and TV role. Sadly neither version is available from Netflix or at my library so I'll have to see if I can get one via inter-library loan, or I may just suck it up and see if I can find a cheap copy on the internet.

Bloggers, has anyone seen either version? And how did everyone do with their spin picks?
Posted by Karen K. at 8:44 AM