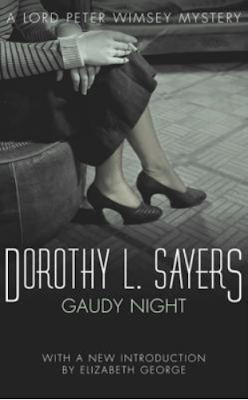 Once again, I have waited until the bitter end to post my final book for my very own challenge. You would have thought that a Classic Crime Novel would be an easy and fun book to read, most likely one of the first books crossed off the list. I thought so too.

Originally, my plan was to read one of several British Library Crime Classics I have unread on my shelves, but I'm sorry to say I've read two so far (in 2017, so I couldn't count them for this year's challenge) and in both cases I was underwhelmed. I started two others this year and abandoned both of them. I also thought about counting The Mystery of Edwin Drood or Whisky Galore, but neither really felt as though they fit the category -- Drood is unfinished, so it's not exactly clear if a crime was committed; and Whisky Galore is really more of a gentle comedy -- OK, they're stealing whisky, but it wasn't exactly the crime caper of the year. I also read Four Days' Wonder by A. A. Milne, which starts out with the discovery of a dead body, but that was really more of a screwball comedy.

With less than a week left in my own challenge, and potential embarrassment looming, I gave up choosing from my own shelves and downloaded Dorothy Sayers' classic Gaudy Night from the library's online library. Published in 1935, it's considered by many to be Sayers' best novel. It's the twelfth in the Lord Peter Wimsey series and the third to include Harriet Vane, who is actually the main character in the story (Lord Peter doesn't even actually show up in person until the second half of the book).

So. Harriet Vane, an alumnus of Shrewsbury College (a fictional women's college which is meant to be part of Oxford), receives an invitation to a reunion known as a Gaudy. On a whim, she accepts and after arrival, receives a nasty anonymous note stuck in the sleeve of her gown (back in the day all the students and instructors wore the black caps and gowns now traditionally worn only for graduation ceremonies). Having received poison pen letters in the past, she dismisses it and returns home. However, it turns out that someone at Shrewsbury is up to some mischief -- more notes and harassing letters are discovered, plus threats and destruction of property. The Dean of Shrewsbury is loath to contact the police, for fear of scandal, but she asks Harriet to return and quietly solve the mystery. Harriet begins to suspect various instructors, students, and staff members before enlisting the help of Lord Peter to find the culprit. Normally I do try to read series books in order, but I'd heard this was Sayers' best novel and I really wanted to read more about Harriet Vane. (I know many people love Peter Wimsey but he's not my favorite detective of all time.) It was a good choice, though, because I really liked this novel. It's the fourth of the series that I've read so far, and the second with Harriet Vane. My previous Sayers read was Strong Poison, which introduces Harriet Vane as a murder suspect on trial for her life. Naturally Peter saves the day and falls in love with her. Harriet's character is hardly developed in that story, and I'd actually find it rather annoying that Peter was so smitten without even knowing her. In this one, she takes center stage, and there's a lot more about women's education and the role of women, both in and out of academia. We learn a lot more about the attitudes of both men and women towards the rights of women, which I'm sure Sayers experienced first-hand when she was an Oxford student about the same time as her fictional counterpart. (We also get some insights about being a successful author which I particularly enjoyed).

The reader does get more information about Peter and Harriet's relationship, which I admit was one of my favorite parts of the book. I did find the book a bit dense in parts when the academic characters are discussing philosophical points that I found a bit dry and obscure, and I had a bit of trouble keeping some of the characters straight, especially the other academic instructors who mostly seemed to run together. I particularly enjoyed Lord Peter's nephew Gerald who was quite delightful. It was a fun light read for the holidays, and I do want to continue with the series, though I'm not sure if I need to go back and read the rest in order or I can just skip around (I've heard Busman's Honeymoon is another of Sayers' best novels). Bloggers, what do you think? Read in order or skip around?

I'm counting this as my Classic Crime Novel for the Back to the Classics Challenge.
Posted by Karen K. at 7:30 AM

Labels: Back to the Classics 2018, between the wars, crime, mystery