Hester: A Novel of Contemporary Life by Mrs. Oliphant 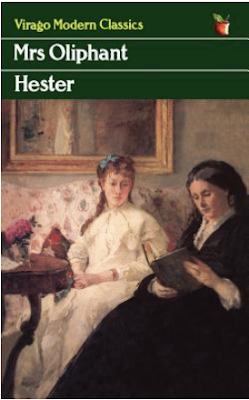 I counted the other day and I still have more than thirty unread Virago Modern Classics on my TBR shelves (though technically, some of them are not VMC editions). I'm desperately trying to take control of the TBR shelves, so Margaret Oliphant's Hester: A Novel of Contemporary Life was my pick for the May/June prompt of the Victorian Reading Challenge (long titles or sub-titles).

First published in 1883, this is the story of two strong women in the fictional town of Redborough. The Vernon family name is synonymous with banking and stability, and in the beginning of the novel, a scandal erupts about 30 years prior -- John Vernon, head of the bank and the grandson of the founder of the Vernon family bank, has fled the country, and rumors are flying around town that there's about to be a run on the bank (if you've ever seen It's A Wonderful Life, you know exactly what this means: word is out that the bank doesn't have the funds and is about to collapse, so everyone rushes to the bank to get out their money before it's gone).

Mr. Rule, the chief clerk, goes to Mr. Vernon's home in desperation, and he's nowhere to be found. His young and flighty wife insists that he'll be back soon, and offers the clerk all the money she has in the house, about 20 pounds. Instead, Mr. Rule does the unthinkable -- he approaches Mr. Vernon's cousin Catherine, a spinster, who is a shareholder but has naturally never been involved. Catherine is naturally concerned and with her funds and brains, she saves the bank, restoring the family name, and thus the town's revered and powerful benefactor.

The story then jumps forward to the 1880s, and John Vernon's widow (known as Mrs. John), is returning to Redborough after the death of her husband. Mrs. John moved Abroad and joined her husband after she was forced to give up her beautiful home in the wake of the banking scandal, and she hadn't returned since. Now living in genteel poverty, she returns to the scene with her teenaged daughter Hester, who was born much later and knows nothing about this embarrassing episode or her father's role in it. She and her mother move into the Vernonry, a great old house that Catherine Vernon had converted into multiple dwellings, normally offered to impoverished relatives. All of them are living off Catherine's generosity, but most of them are bitterly resentful and disparage her whenever they can.

Unfortunately, young Hester gets off on the wrong foot with Catherine, who calls on her mother late on the first evening of their arrival. Hester doesn't realize how important a benefactress Catherine is, and is rather rude and protective of her mother, and from this day forward, she and Catherine don't care much for one another. Catherine finds Hester standoffish, and Hester is influenced by the cutting remarks about Catherine by her neighbors, who are a kind of Greek chorus of frenemies. The only neighbors who seem thankful and benevolent are Captain and Mrs. Morgan, who related to Catherine's later mother, and are not technically Vernons.

Things in Redborough are fairly uneventful until Hester turns nineteen and blossoms into a lovely young woman, attracting the notice of two of her distant cousins, who have been chosen by Catherine to succeed her in running the bank -- the dull but handsome Harry, and the hardworking Edward, handpicked by Catherine as her surrogate son and heir. Harry is in love with Hester, but she's not interested, and Edward is attracted to her but can't risk incurring the wrath of Catherine, who has never liked Hester. Meanwhile, the Morgan's grandson Roland arrives, on the lookout for new investors in his stockbroking business, and Edward thinks this may be his chance to finally become independent of Catherine. 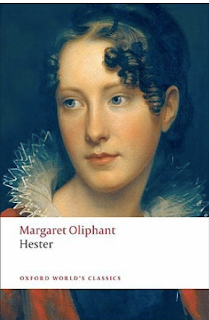 I really liked this novel -- it's fairly long, almost 500 pages, but I really got invested in the plot and the characters. I got so caught up in the story I finished it in only four days. A couple of the characters reminded me a bit of Jane Austen -- Roland's sister Emma shows up, desperate for a husband, and I found her somewhat like Lucy Steele from Sense and Sensibility, though she's not nearly as malicious.  It was nice to have a Victorian novel with strong women characters. Margaret Oliphant clearly had some ideas about working women, and expresses them through Hester's frustration:

"I thought you hated Catherine Vernon," Roland cried.
"I never said so," cried Hester; and then, after a pause, "but if I did, what does that matter? I should like to do what she did. Something of one's own free will—something that no one can tell you or require you to do—which is not even your duty bound down upon you. Something voluntary, even dangerous——" She paused again, with a smile[Pg 7] and a blush at her own vehemence, and shook her head. "That is exactly what I shall never have it in my power to do."
"I hope not, indeed, if it is dangerous," said Roland, with all that eyes could say to make the words eloquent. "Pardon me; but don't you think that is far less than what you have in your power? You can make others do: you can inspire . . .  and reward. That is a little highflown, perhaps. But there is nothing a man might not do, with you to encourage him. You make me wish to be a hero."
He laughed, but Hester did not laugh. She gave him a keen look, in which there was a touch of disdain. "Do you really think," she said, "that the charm of inspiring, as you call it, is what any reasonable creature would prefer to be doing? To make somebody else a hero rather than be a hero yourself? Women would need to be disinterested indeed if they like that best. I don't see it. Besides, we are not in the days of chivalry. What could you be inspired to do—make better bargains on your Stock Exchange?"

Margaret Oliphant was one of the most prolific Victorian authors,  probably the most prolific women author of the era. She published her first novel in 1849, when she was just 21, and published more than 120 novels, supporting her family after her husband's death in 1852. Like many Victorian women authors, only a few of them are still in print, though there are quite a few on ebook, and many are free through Project Gutenberg. I've now read six of her novels so far -- Hester; The Mystery of Mrs. Blencarrow, I've read three of her Carlingford Chronicles, Miss Marjoribanks and The Rector and The Doctor's Family, two novellas in one volume. Virago Modern Classics reprinted the rest of the series and I'm tempted to track those down as well.
Posted by Karen K. at 3:55 PM