The Warmth of Other Suns by Isabel Wilkerson 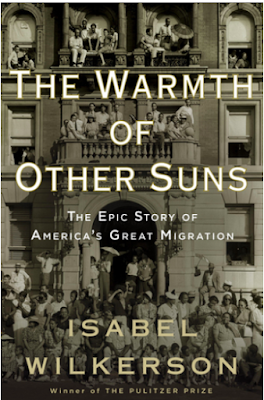 Despite growing up near Detroit, spending a decade of my life in Chicago, then spending another 16 years in the American South (Texas and Florida), my knowledge of Black history is pretty pathetic. I'm really trying to educate myself about BIPOC issues and authors, and dove into another Big Summer Book a couple of weeks ago. It's a fairly long book, more than 500 pages of text, but the stories are so compelling and the writing is so good that I could hardly put it down and finished it in less than a week.

The Warmth of Other Suns is the kind of history book I love, non-fiction that reads like fiction. Pulitzer Prize-winning journalist Isabel Wilkerson interweaves the narrative story of three different African-Americans who leave the South in the first half of the century, part of the Great Migration. From 1915 to 1970, approximately 6 million African-Americans left the South, migrating North and West, hoping for a better life for themselves and their families in states without Jim Crow laws. Wilkerson shares the stories of three people: Ida Mae Gladney, a pregnant sharecropper, stealthily leaves Mississippi in 1937 with her husband and two children to Wisconsin and then Chicago; George Starling leaves the orange groves of Central Florida in 1945 and becomes a Pullman porter based in Harlem; and surgeon Robert Foster leaves for California in 1953, since even his medical degree and experience as an Army doctor fail to protect him from prejudice and discrimination in his home state of Louisiana.

All three have very different stories, but they're equally absorbing and often horrifying. A neighbor of Ida Mae was nearly beaten to death when he's believed to have stolen some missing turkeys (who were merely roosting in a different part of the nearby woods). George tries to organize a strike of  fruit pickers working for pennies a box in dangerous conditions during the height of demand in WWII, and has to leave town after he hears a rumor he's about to be lynched. Dr. Foster works for years as a surgeon on a U.S. Army base in Austria, but he can't even find a motel for a night's rest as he drives for days on his Westbound route to California, even after leaving the South. Over and over there are stories of racial slurs, discrimination, and police brutality. Clearly, things haven't changed much.

Once they leave for the west and the north, all three still face discrimination, just less subtle. Practices of redlining prevent African-Americans from renting and buying, so they end up paying more for less, forcing them to live in crowded apartments and neighborhoods. Ida Mae and her husband are shut out of job after job. George Starling finally gets a backbreaking job as a train porter, but after years of service, is never promoted. Though a respected surgeon, Dr. Foster has to drive all over Los Angeles collecting urine samples for an insurance company to make enough money and contacts to set up his own practice.


The presence of so many black migrants elevated the status of other immigrants in the North and West. Black southerners stepped into a hierarchy that assigned them a station beneath everyone else, no matter that their families had been in the country for centuries. Their arrival unwittingly diverted anti-immigrant antagonisms their way, as they were an even less favored outsider group than the immigrants they encountered in the North and helped make formerly ridiculed groups more acceptable by comparison.

These incidents happened years ago, and it's still happening now. I'm appalled that I was never taught any of this in school -- and I grew up less than 30 miles from downtown Detroit. I didn't know that Chicago, a city in which I lived for almost ten years, is one of the most segregated in America, and has some of the most racist suburbs and the worst racial riots. I didn't know that one of the most racist cities in Florida was less than an hour from my in-laws retirement home, halfway between their house and Disney World. And I'd never heard of Juneteenth even though I lived in Texas for eleven years and my children were required by state law to take an entire year of Texas history. They were never taught it (and the Civil War was about the South "defending State's Rights." Some people still call it the War of Northern Aggression).

But this isn't about me, or my lack of education. I intend to from the real struggles and lived experiences Black Americans and other minorities are facing now and have been facing for years. I want to be a better reader and a better blogger, and read more books by BIPOC authors. I highly recommend The Warmth of Other Suns if you want to do the same. If you are looking for more suggestions, here is an anti-racist list by Ibram X. Kendi.
Posted by Karen K. at 2:31 PM