'People who read no books are always fools to those who do read.'

Last week was particularly stressful -- the news is so dire and it only seems to get worse -- so it was time to turn to one of my favorite comfort authors, Anthony Trollope. I still have several of his novels unread on the shelves, and three of them were long enough to qualify for my Big Book Summer Challenge. I chose the shortest of the lot, John Caldigate, because the eponymous character travels to Australia, and it sounded like some nice armchair travel since I won't be going anywhere for a while.

Published in 1979, John Caldigate is one of Trollope's lesser-known works, and a standalone novel. It's the story of young Mr. Caldigate, heir to the estate of Folking in Cambridgeshire. His mother and sisters died years ago, but sadly, John's father was mourning and distant while he was a boy, so he mostly grew up on his cousin's estate. Now in his early 20s, John has left Cambridge, and is saddled with numerous gambling debts. The estate is entailed upon him, but his father has decided to disinherit him in favor of a cousin, and John takes a buyout from his father, pays off the debt, and books passage Australia with a classmate, Dick Shand, where they hope to make their fortune in the gold mines. While meeting with his father's banker Mr. Bolton, John spies his teenaged daughter Hester, and is struck by her beauty.

Before his boat sails, John goes to say goodbye to his cousins, where his aunt pressures him to marry his oldest cousin Julia. John refuses to get himself engaged, and hightails it to the boat with his friend Dick, where they travel second-class, despite being gentlemen. On the voyage, John strikes up a friendship with a pretty actress, a widow known as Mrs. Smith. It's a long voyage and tongues start wagging, and it seems like everyone on board is aghast, including the ship's captain, and they all try to warn him off, but John is undeterred and declares himself engaged to her.

John and Dick stake a claim and start looking for gold, and after a detailed description of gold mining, he makes a trip back to Melbourne to look up Mrs. Smith. Then the story jumps forward in time several years. John is back in England, having made a fortune of £60,000. His father has missed him dreadfully and John pays off the mortgage on the estate, reinstating himself as heir. And now it's time to find himself a wife. John never forgot the beautiful Hester Bolton, now 20, and begins to court her, to the chagrin of her mother, a religious fanatic. She opposes the marriage from the beginning, but she can't stop it. All seems well until about a year later when some unsavory characters from Australia arrive, and John's world is turned upside down as he faces extortion and bigamy charges.

I assumed this would be the standard Trollope comfort read, but elements of the plot went dark pretty quickly; particularly, Trollope's depiction of Mrs. Bolton's religious mania, (much of which I skimmed over). After John is charged with bigamy, the Boltons do something really despicable to Hester, which I would have found unforgivable. I was also distressed by some of John's relatives, especially his Aunt Polly who tries to snare him into marriage with his oldest cousin Julia. Some of Hester's relatives are pretty awful as well. 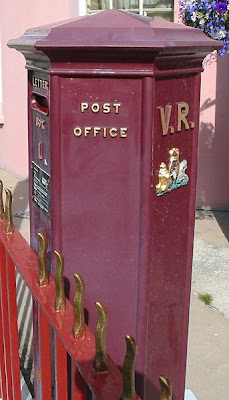 I did enjoy Trollope's description of the sea voyage to Australia and the courtroom and trial details. There's also a pivotal side character who is a postal employee which I found delightful. Trollope worked as a postal employee for more than 20 years, so he must have really enjoyed including his detailed knowledge of stamps and postmarks into one of his novels. (Fun fact: Trollope invented the British post-box).

This was a fast read, and a solid Trollope story. He doesn't get nearly the love of Dickens or Hardy, and of John Caldigate is definitely one of his more obscure novels -- there are hardly any editions and very few cover images. However, while searching online, I discovered that in 2015 John Caldigate was adapted into a graphic novel called Dispossession, by Simon Grennan. As far as I know, it's the only Trollope novel adapted, and it's an interesting choice because it's such an obscure novel. And I'm curious about how he condensed a 600 page Victorian chunkster into less than 100 pages. 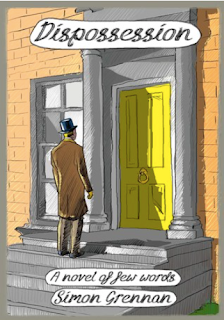