Paris in July: Secrets of the Flesh: A Life of Colette 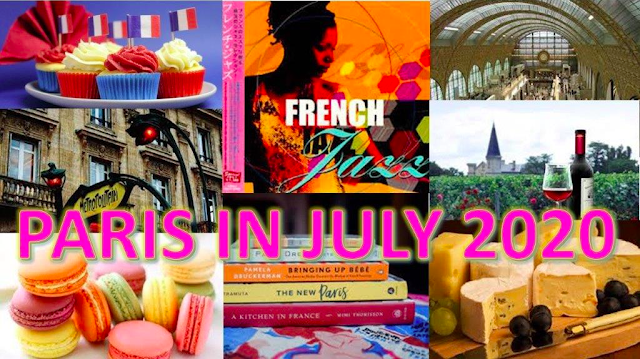 Colette's 'virile' genius . . . justified the excesses of her life. "Let us give her the complete freedom of her actions," Rachilde exclaimed. "She is is one of those who would shake the stars while falling from the skies into the mud of our poor earth."

I'd only heard of Colette as the author of Gigi and Cheri -- I'd never actually watched either of the movies, nor heard of the Claudine novels until about a year ago, when I watched the film starring Keira Knightley based on this biography. I actually saw the film in a tiny movie theater in Nice, France, while spending a long weekend while we lived in Germany; normally,  I wouldn't spend precious holiday time watching a movie, but the theater was less than five minutes' walk from my hotel, and there was a late showing. And how cool is it that I saw a movie (albeit in English) about a French writer while in France? 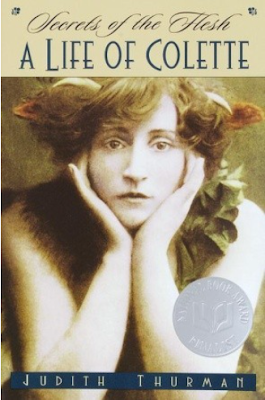 So, naturally, I had to order Colette's biography Secrets of the Flesh as soon as I returned home. I didn't get around to it at the time, but it's a perfect summer read, for Paris in July and also the Big Book Summer Challenge. I'm always interested in the lives of writers, but I had no idea how scandalous and groundbreaking her life was. Considered the greatest woman writer of France, she wrote 30 books, plus plays, essays, screenplays, and published hundreds of articles and reviews as a journalist. She acted on stage and was notorious for her affairs with both men and women, and married three times.

If you haven't seen the film, Sidonie-Gabrielle Colette (1873-1954) married the writer/publisher Henry Gauthier-Villars (known as Willy), 14 years her senior, when she was just 20. Willy published a lot of books written by ghostwriters, and when the couple was in need of cash, he took Colette's notebooks, loosely based on her childhood, and published the first story (under his own name) as Claudine at School, the story of a spunky and scandalous girl growing up in a country town. It became an instant success, and three more Claudine novels followed. Colette and Willy became a celebrated couple in intellectual and literary circles.


They also had a troubled marriage plagued by affairs on both sides (once with the same woman!) and eventually split. (It didn't help that in 1907 Colette discovered he'd sold the copyright to her Claudine novels for a pittance). Colette scandalized society by acting on the stage, sometimes semi-nude, and was publicly out as a bisexual. In one production, she caused a near-riot by kissing her female lover onstage.

Like the Claudine stories, much of her work was semi-autobiographical, before or after the fact. Echoing the plot of Cheri, Claudine had an affair with her stepson Bertrand de Jouvenel from her second marriage (the half-brother of her only child) when he was only sixteen, and she was in her late 40s. The scandal was one of the factors for her second divorce. But the marriage to her third husband Maurice Goudeket (16 years younger than Colette) lasted until her death at age 81.

Colette's career spanned the Belle Epoque, World War I, the 1920s, the rise of Nazism, and World War II. Weirdly, she wrote for a pro-Nazi newspaper during the War, and her last novel has some seriously anti-Semitic overtones -- though her last husband was Jewish and was actually imprisoned by the Gestapo for a few months (he was only released due to the intervention of the French wife of the German ambassador. Maurice spent the rest of the war in Paris but the couple was always in fear of a second arrest).
I don't think Colette is someone I would have liked to meet in real life -- she sounds very self-absorbed, probably narcissistic, and some of her actions were really questionable. She was a real paradox -- she didn't believe in feminism but she wanted to work; she was bisexual but didn't approve of her daughter's homosexuality; she wrote for an anti-Semitic paper, yet her husband was Jewish. Maybe she believed that she should be the exception?

However, she did lead a fascinating life. I found it so interesting how she was able to make a career for herself as a writer and celebrity for more than fifty years, especially as a woman in that time period -- she wrote about 30 novels, plus plays, essays, and countless articles and reviews. It's very impressive for a woman to have been such a prolific writer in the first half of the 20th century, especially in France where women couldn't even vote until 1944. It's a really interesting look at life at the time period. Even though I've still only read one of her novels I found it an absorbing piece of social history.

I do want to finish the Claudine novels (I have the Complete Claudine edition) and eventually Gigi and Cheri. I've also checked out the film version of Gigi from the library and hope to get to it by the end of the month. How's everyone else doing with Paris in July and the Big Book Summer Challenge?
Posted by Karen K. at 4:54 PM