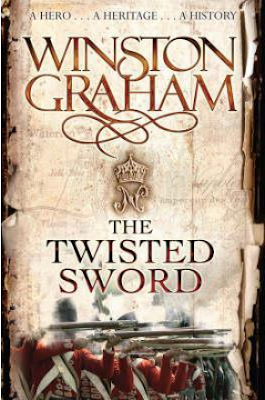 I can't believe I'm on the 11th novel in this series, and I never blogged about it. I used to read a lot of historical novels, then I kind of got away from them when I got hooked on mid-century women's fiction. I only started reading the Poldark series after watching the PBS series when it first aired, the summer of 2015 when I was in Outlander withdrawal. I loved the first series which covers the first two novels, and promptly read the first ten books in less than a year. I'm not sure why I stopped there but suspect it had something to do with our big overseas move to Germany the summer of 2016. Our new library didn't have the last two novels, but on a trip to London that summer, I went to three different bookstores to find them -- and promptly left them gathering dust on the TBR shelves until now, prompted by my Big Book Summer Challenge.

It is a little hard to get back into a series after a four-year reading gap (some of the supporting characters were a little fuzzy, but my edition thoughtfully included a family tree), but essentially, the book picks up pretty soon after the previous book, in the peace of 1815. Ross and Demelza's older children are grown and married, and Ross gets a summons to help out as an "observer" in France (and gets a baronetcy thrown in for good measure). Ross, Demelza, and the two youngest children head off to Paris, for what seems to be a good time, but that wacky Napoleon escapes from Elba and makes a triumphant return. [Bonus: this book also counts for Paris in July!]

Ross is on an assignment and gets separated from Demelza and the children, who flee to Brussels, where she meets up with her oldest son Jeremy and his new bride. Ross gets caught up in the war, so I had another perspective of the Battle of Waterloo, my second this year! But from the Coalition (Allied) side this time. My knowledge of French history is quite fuzzy and I didn't realize that Waterloo actually took place after Napoleon escaped from Elba, shame on me. There are a lot of descriptions of the horrors of war. I have been meaning to read La Debacle, Zola's masterful war novel, this summer, but maybe I'll put it off.

Sadly the war doesn't end well for everyone in the book. Meanwhile, back in Cornwall, the eldest Poldark daughter Clowance and her new husband are having money troubles, no thanks in part to George Warleggan. There are also some appearances by George's son Valentine; everyone's favorite doctor, Dwight Enys; and some local color with a pregnant housemaid who may or may not marry a local guy to give her baby a father.

After a bit of confusion, I settled nicely into this 656 page chapter of the Poldark family, and ended up racing through it in less than a week. It's amazing how fast I started to remember details and characters (though a few are still a bit fuzzy and I've already requested the previous book from the library, so I can skim through it). Winston Graham was really good at creating the world of Cornwall from the time period. I loved most of the good characters and became outraged at the bad ones (George Warleggan has been carrying grudges against the Poldarks for how many years now?)

My only quibble was that the youngest daughter, Isabella Rose, is only THIRTEEN when the book starts and men are already courting her, ewww. I think Graham was setting up the story for the final book which is named after her. It's another 688 pages and I'm sure I will read it with enjoyment and more than a little sadness because the book series is ending. I've watched most of the TV series and unfortunately have gotten really bored with it, I didn't even finish the final season. Maybe I'll have to give it another try after I finish the final novel. I also own another long novel set in Cornwall called Penmarric and I'm looking forward to that one also.

How's everyone else doing with their summer reading? And can anyone recommend another great historical TV series and movies?
Posted by Karen K. at 10:40 AM