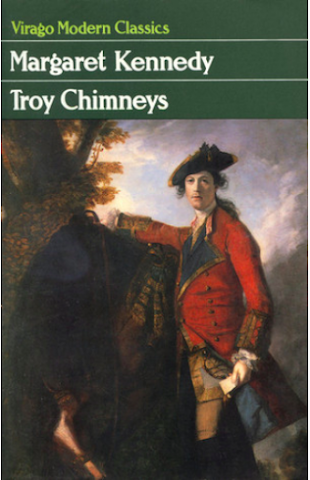 Another Classics Spin success! I always look forward to the Spins, they motivate me to read the books that I keep putting off. I bought this in June of 2017, on a trip to London in the hottest week of the year. . I had a bit of nostalgia when I found the receipt still stuck in the back of the book, from a used bookseller on Charing Cross Road. (I paid £5 for it, one of three green Virago Modern Classics purchased that day).
Troy Chimneys by Margaret Kennedy had all the signs of an ideal read for me. Published in 1953, the story begins with correspondence in 1879, between two brothers-in-law. The honorable Frederick Harnish is researching some family history while recuperating from something unspecified, and requests some papers left by an ancestor, Ludovic, who died in 1830. He's specifically looking for letters he might have written, and what emerges are letters and diary entries from Ludovic's lifelong friend Miles Lufton, the owner of a property called Troy Chimneys. So, essentially this is a mid-century book about a Victorian researching a Regency ancestor.
What follows are the memoirs of Miles Lufton, a former MP from Wiltshire. The actual property called Troy Chimneys is mostly peripheral -- it's really just slices of life in the early 1800s by a man on the fringes of upper-crust society. Son of a clergyman, he really doesn't have any money, but uses his Oxford connections to gain a seat in Parliament, though that's not a big part of the book either. It's more about his everyday life, though there are hints of a family scandal that is revealed at the end of the story.
Not a long book at just under 250 pages, but not what I'd call a quick read. It was slow going at first as the story is first framed by correspondence regarding the history of the late relatives, and also a bit confusing as Lufton begins to explain the history of his family -- I really should have written down a family tree as I was reading. It's also a bit confusing because Lufton sometimes refers to himself as Pronto, which is sort of his alter ego, the sociable persona he adopts to make himself interesting and in demand as a guest with the upper-crust people. It's also a bit confusing that two of the characters are Lufton and Ludo. 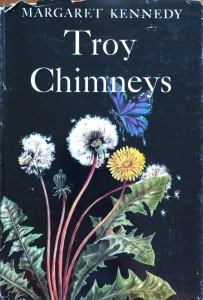 But I really did enjoy it. What I liked most about it was that it was really written in the style of the Regency period -- it probably slowed down the reading, but I really felt like this could have been written by Jane Austen or one of her contemporaries, thought it's definitely from the male point of view. Miles could absolutely have been a minor character in a Jane Austen novel, like Mr. Yates in Mansfield Park or Captain Fitzwilliam in Pride and Prejudice -- probably as a sidekick to a leading man, but a younger son without much money.
The book does include a Jane Austen reference which delighted me:
But over novels she was obstinate; she could not like them. . . . she objected strongly to anything sentimental, nor would she listen to my pleas for my favorites: Emma and Mansfield Park, of which she complained that they kept her continually in the parlour, where she was obliged, in any case, to spend her life. A most entertaining parlour, she allowed, but:
'That lady's greatest admirers will always be men, I believe. For when they have had enough of the parlour, they may walk out, you know, and we cannot.'
Interesting that a woman of the period (albeit fictional) would have thought of it that way! Yet very true. And so ironic since nowadays the majority of Austen's fans are women.
So, a very successful Spin pick, and I hope there will be another before the end of the year. Only 18 books left on my Classics Club list! I'm tempted to try and finish it in 2020, though there are several doorstoppers which would probably slow me down. Still, it's worth trying.
Bloggers, did you participate in the latest Classics Spin? Did you enjoy your pick?
Posted by Karen K. at 9:57 AM