Imperial Palace by Arnold Bennett: Upstairs and Downstairs in a London Hotel 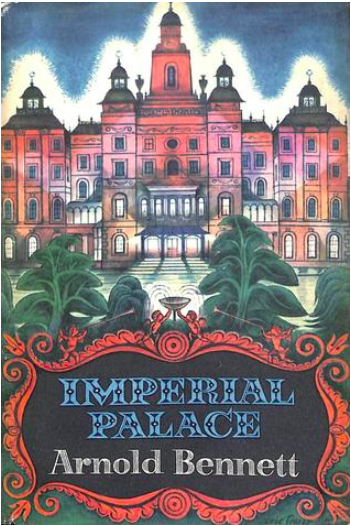 He knew the exact number of guests staying in the hotel that night; but their secrets, misfortunes, anxieties, hopes, despairs, tragedies, he did not know. And he would have liked to know every one of them, to drench himself in the invisible fluid of mortal things. He was depressed. He wanted sympathy, and to be sympathetic, to merge into humanity. But he was alone. He had no close friend, no lovely mistress -- save the Imperial Palace. The Palace was his life. And what was the Palace, the majestic and brilliant offspring of his creative imagination and of his organising brain? It had been everything. Now, for the moment, it was naught.
Imperial Palace by Arnold Bennett has been on my TBR pile for about 10 years, since I found a copy for $1 at the library's used Book Cellar. I was really hoping it would be the book assigned by the latest Classics Club Spin, I thought I'd try and tackle it anyway as part of my Big Book Summer reading challenge.
Set in the late 1920s, it's approximately a year in the life of two hotel employees at the eponymous hotel, a swank London establishment (based on the luxurious Savoy hotel). The manager, Evelyn Orcham, is in his late forties and has devoted his life to the hospitality business, working his way up from the bottom. He's now at the top of his profession, the most respected hotel manager in London. The other main character is Violet Powler, a young manager from the hotel's laundry division, who Orcham promotes to floor housekeeper and begins to fast-track her career to bigger and better things in the hotel.
Their stories are intertwined with the arrival of the blustering Sir Henry Savott (baronet) and his impulsive daughter Gracie, one of the Bright Young Things of the London set, known for her fast cars and eccentric ways. It's mostly set in the hotel and supporting establishments, and follows their lives amid the day-to-day workings of the hotel, including difficult guests, a merger, a massive holiday celebration, love affairs, jealousy, gossipy employees, and potential scandals. It's a bit like Downton Abbey, only set in a 1920s hotel instead of a country house. (It also reminded me of Norman Collins' Bond Street Story, which I also loved).
And the story is long, nearly 800 pages. It's not a difficult read, but I found myself reading it fairly slowly, spreading it out over several weeks. There are a lot of short chapters, like a Victorian novel, so there were plenty of stopping points; also, I really didn't want it to end. For the most part, I really enjoyed the characters, and I loved being in their world. I had a particular interest in this novel because years ago, I was employed at a large hotel in Chicago, where I worked in the kitchens as a pastry cook for almost two years. Of course I didn't see nearly all the minutiae of housekeeping and guests, but I learned a lot about how much work is involved in running a large operation, keeping all the departments coordinated and the logistics of large events. In the kitchens alone we had to deal with catering, ordering, stocking, room service, stewarding, and so on. A hotel is like a giant machine and all the parts fit together, and I am always fascinated by how much work goes into coordinating everything. Based on my own experience, Bennett must have had first-hand knowledge of how a hotel was run because that aspect of the book seemed really authentic. (Bennett also wrote about hotels in the much shorter novella The Grand Babylon Hotel, and briefly in The Old Wives' Tale).
That being said, this novel was published in 1930 and there are some racist and sexist bits that made me roll my eyes. The hotel manager Orcham doesn't seem to think much of women's intelligence unless they are useful to him, and both the main characters are pretty xenophobic -- there are actual Italian and French employees, the horror! And I was pretty sure I knew how the book would end up, but there was one outcome that I did not like one bit, it was so sexist.
Overall, though, I really did enjoy this book and it will probably be one of my favorites for the year.
Posted by Karen K. at 2:36 PM