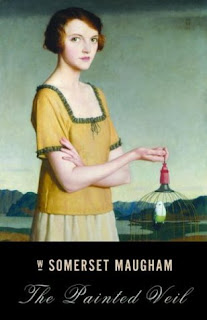 Note: Much to my chagrin, I cannot change the typeface of this posting.  I apologize for any squinting this may cause.

Synopsis:  Set in the 1920s in England, Hong Kong, and China, The Painted Veil is the story of twentysomething Kitty Fane.  Young, beautiful, and shallow, she marries Walter Fane after suddenly realizing she was running out of time and needed to catch a husband quickly.  After a short courtship, she accompanies Walter to Hong Kong where he is working as a bacterologist.  She quickly becomes bored with Walter, and has an affair with a diplomat.  After discovering her infidelity, Walter decides to punish her by forcing her to accompany him on a dangerous medical mission to a cholera-stricken village in China.  Oddly enough, the worst circumstances bring out the best in Kitty.


Amanda: I actually thought Walter was very well developed, but that might be because of how much I could understand him. He wasn't traditionally developed - it was just a brushstroke of information spattered here and there throughout the novel, leading to a whole picture. I think about things and feel things in very much the same way he does, so it was easy for me to relate to him and make a full picture of him in my mind, I suppose. I could see other people relating to him less, though, because he's the sort of personality that many people have trouble relating to in real life. I think Maugham wrote the social awkwardness well.

I have read, though, that Maugham tended to understand women better than men in his own life, so it's possible that's why the women characters felt more developed. I loved the Mother Superior. I don't normally like reading about Catholics, having grown up Catholic, but the Sisters in that convent were so different from traditional Catholics. Take, for example, one of my favorite quotes from the book:

"Beauty is also a gift of God, one of the most rare and precious, and we should be thankful if we are happy enough to possess it and thankful, if we are not, that others possess it for our pleasure."

I love this. This goes against most traditional viewpoints of beauty. Most books treat beauty either as a precursor to emptyheadedness, or as a great evil. To hear someone speak this way - especially the head of a Catholic convent - is just amazing. I loved that the Sisters were so open, forgiving, and loving. They were the very picture of charity. Even though normally I don't like to read much about religion in books, the passages with the Sisters just blew me away and I think they played an integral role in how much Kitty changed. What do you think?

Karen: I completely agree! They're much more forgiving than Catholics are usually portrayed. It's no wonder Kitty was really drawn to them. I wish I knew them! And I loved that quote also. I don't normally make notes when I write, but I think I have to go back with sticky notes and tab all the passages I loved in this book.

One thing that did bother me about this book was the racist way in which the Chinese are portrayed, mostly the way they're described -- ugly, yellow, etc. That's the one thing that really put me off in this book. But it's possible that Maugham was merely reflecting the attitude of the British of that time, or Kitty's attitude. What do you think?

Amanda: I do think that was reflective of Kitty's attitude. It's possible there was a certain amount of British superiority to it - I think that's almost a given in that time period - but the main characters other than Kitty seemed to have compassion for the Chinese. The nuns, Waddington, Walter. They saw past the racial differences and did everything they could to help. The Chinese were just other people to them, not some strange foreign race that repulsed them. Even Kitty tried to get over her prejudice against them once she was surrounded by the children every day. I liked that. I thought it was a good message - that to overcome prejudice, one must spend time with those one is prejudiced against.

Without giving away spoilers, what did you think about the fate of Walter and Kitty's relationship? Do you think, given the chance, they could have ever come to live together peacefully? Or were they, as Kitty says at one point, "Two little drops in the river that flowed silently towards the unknown; two little drops that to themselves had so much individuality and to the onlooker were but an undistinguishable part of the water?" (That's my other favorite quote.)

Karen: That's going to be tough without giving away the ending. I went back and forth as I read the book. Kitty seemed to really be growing and maturing as a person, so I began to feel hopeful, but then I didn't know if Walter would ever forgive her. It sort of bothered me that Walter was so unforgiving, though he was surrounding by people dying horrible deaths. I would have thought it might have put her transgression in perspective somewhat -- but that also relates to him deliberately bringing her into a situation where she might get infected and die, which is so bitter and vengeful. I saw Kitty changing as a person more than Walter, and I began to actually like her better than him.

This book has so many issues that are great for discussion, but it's really hard without giving away major plot points -- and I reaaaallly hate spoilers. I would highly recommend this book for a face-to-face discussion group -- not too long, an easy read, a great plot and interesting characters. This was a great choice, and I am so looking forward to reading more by Maugham. There are three more on my to-read bookshelf right now, and I am so tempted to go back and reread Of Human Bondage.

So, I know you've read most of the Maugham oeuvre. How does this compare to the others? Is it one of your favorites? Definitely one of mine.

Amanda: Well, I haven't read his entire works - he was an extremely prolific author. Wikipedia has 54 entries for him under the "Novels, Travel, Criticism, and Assorted Pamphlets" section, plus another 24 plays, 187 periodical contributions, and 123 short stories. I've only read a mere glancing of that. I haven't read a single play or short story, though I hope to fix that next year. Of the novels I've read, though, I count The Painted Veil among my favorites, alongside Mrs. Craddock. Some other good ones are The Razor's Edge, Of Human Bondage, and Theatre. In fact, there have only been two Maugham novels I disliked (The Magician and The Moon and the Sixpence). I would definitely recommend his books as easy-to-read classics that are fun but also deep.

Thanks again for doing this review with me, Karen! I was having such a hard time figuring out how to review this book, since I love it so much.

Karen: Thank you, Amanda, for inviting me! It was really fun! We'll have to do it again soon.
Posted by Karen K. at 9:34 AM