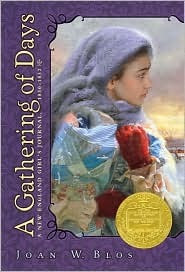 I don't know what I expected from this book.  I like historical fiction, and some of my most beloved Newbery winners are historicals-- I suppose I thought, based on the description, that it would be sort of a cross of  The Witch of Blackbird Pond and one of the Little House books.  It wasn't.  This book is well written and has lots of great historical details, but somehow, it just didn't grab me.  Maybe I didn't get enough of the heroine's personality -- in fact, when I sat down to write this I'd already forgotten her name!  [I looked it up.  It's Catherine.]  Basically, this is the diary of a teenaged girl living in New Hampshire, as the title says, from 1830-1832.  She lives with her father and younger sister on a little farm in a small town -- no mother, who died in childbirth years ago -- and it's just what happens in her everyday life.  It starts out when she's 13 and ends when she's 15.
I just couldn't figure out where this book was going.  Of course, it's a diary, and real diaries aren't novels, they're just bits and pieces, like tiny written snapshots of a person's life.  If it was a real diary there wouldn't be any connectedness.  But I have read excellent books for both adults and children in diary form -- The Absolutely True Diary of a Part-Time Indian was one that I could not put down and read in one sitting.  I think the best epistolary novels have some kind of overarching plot or theme, some kind of natural progression.  In this book, there were little bits that were introduced and hinted at, but not much follow up, like the possibility of a fugitive slave, maybe a teen love story with her best friend's brother, a new stepmother -- it all sort of seemed disjointed, and somehow I was disappointed.  There's nothing wrong with it, I just never really got excited about reading it.
Some of the descriptive passages were interesting, and the details of life in the 1830s.  Life was really hard back then, people died left and right, though it doesn't sound like anyone was in danger of starving.  I think one of the strongest points is Blos' descriptions.  Winters in New Hampshire sound extremely harsh, and I felt really cold when I read this passage:
Father had made his way to the barn, re-digging the path as he must each day against the sweillling drifts.  There he'd readied the oxen up and brougtht them out to wait in the yard -- the yard itself reduced by snow with only as much of it cleared each day as we might need to use.
This morning the team breathed out great clouds.  Father, to benefit by their warmth, placed himself between their bodies, but even so kept moving -- it was that cold.
I immediately went looking for my fuzzy socks. And a hot cup of tea. And I thanked my lucky stars once again for being born in the 20th century, with the benefits of central heating and indoor plumbing.

I liked this book, but I can't see myself recommending it left and right like I have with other Newbery winners; when I think of the Newberys, I imagine a book that's somehow really special.  Maybe 1980 was just a tough year in children's publishing.  I checked the Newbery list for the 1980 Honor books to see what were the runners-up, since sometimes the Honor books are more memorable than the actual winner (like Charlotte's Web  -- honestly, how could  that have lost to Secret of the Andes?  Seriously!).  I suppose it's worth noting that the Newbery committee only found one book  in 1980 worthy of mentioning as an Honor book -- The Road From Home: The Story of an Armenian Girl, by David Kherdian.  I looked it up in my library's OPAC, and it's actually nonfiction.  It actually sounds really interesting -- a biography of the author's mother, specifically about her childhood in Turkey before the Turks deported all the Armenians. Now that sounds like a compelling story.
Newbery Count: 32/89
Posted by Karen K. at 12:17 PM