The Island of Dr. Moreau by H. G. Wells 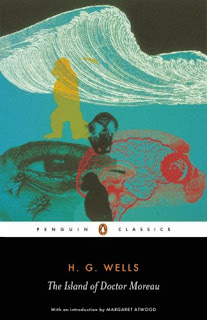 I'm sort of sorry I read this book. I probably should have read The Invisible Man instead, but this one just sort of jumped off the shelf and into my hands.  And I am somewhat disturbed by it.  This is an extremely weird, disturbing story.  Maybe I have no business reviewing this book since I hardly ever read science fiction or even much fantasy
This book begins with a prologue, written by a man claiming that years ago, his uncle was rescued nearly a year after a terrible shipwreck, and claims to have absolutely no memory of that period whatsoever.  So, anyway, the protagonist, Edward Prendick, is rescued from said shipwreck.  After drifting for days in a lifeboat, he finds himself on a boat with a nasty drunken captain and a lot of unhappy animals.  Prendick was nearly dead and is nursed back to health on board by one of the passengers, Montgomery, who on his way to a remote island with the animals.  He's also accompanied by a strange sort of deformed man, but Montgomery is very elusive.  The whole situation is very weird, and Prendick keeps hearing horrible animal screams.  The captain hates the whole business, and after a fit of drunken rage, throws Prendick off the boat when it's time to drop off Montgomery.  Prendick has no choice but to land on the island with this mysterious bunch until he can find another ship to take him home.  Ships rarely stop at the island, so it could be months or even years before he can leave, and things quickly become even stranger.
It turns out this nameless island is the home of Dr. Moreau, who left England in disgrace when it was revealed that he was doing some very odd experiments and surgeries on animals in the name of science. He is a vivisectionist, that is, he's doing experiments on live animals. (Apparently, the English love for animals goes back many years).  Dr. Moneau is obviously continuing his gruesome research on the island, and he's less than thrilled about Prendick's presence but can't very well leave him to die.  They allow him to stay as long as he doesn't poke his nose into their business, but of course Prendick realizes there are some pretty horrible things going on, with terrifying results.
H. G. Wells really was an excellent writer.  The writing really grabbed me, and after about the first thirty pages, I couldn't put the book down and read most if it in a single sitting.  However, it wasn't because I liked it so much as I needed to find out what happened.  Here's a great example of the terror that Prendick experiences:
"So long as I live I shall remember the terror of that chase.  I ran near the water's edge and heard every now and then the splash of the feet that gained upon me.  Far away, hopelessly far, was the yellow light.  All the night about us was black and still.  Splash, splash came the pursuing feet nearer and nearer.  I felt my breath going, for I was quite out of training; it whooped as I drew it, and I felt a pain like a knife at my side.  I perceived the Thing would come up with me long before I reached the enclosure, and desperate and sobbing for breath, I wheeled round and struck at it as it came up to me -- struck with all my strength."
Of course H.G. Wells is known as a groundbreaking writer of science fiction. Published in 1896, The Island of Dr. Moreau  was his second book, after the extremely popular The War of the Worlds. According the book's introduction [Modern Library edition], H. G. Wells actually studied zoology under T. H. Huxley, who was a disciple of Darwin and believed in both social and biological evolution.  I suppose this book is still timely because of all the ethical implications of biomedical research, cloning, and animal rights.  To me, it's just sort of creepy and disturbing.
This is book #5 for Our Mutual Read Challenge.
Posted by Karen K. at 12:46 PM