The View From Saturday by E. L. Konigsberg 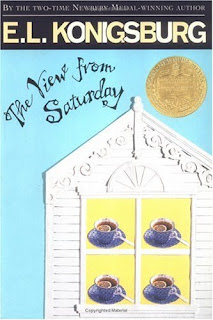 Now, this is a Newbery-worthy book.  Wow. And why did it take me so long to read it?

I was a little apprehensive reading this book.  To be honest, some of the Newberys I've been reading lately were not as impressive.  And E. L. Konigsberg is the author of one of my absolutely favorite children's books of all time, From the Mixed Up Files of Mrs. Basil E. Frankweiler. I wanted to be just like Claudia, and run away from home and live in a museum. (I hope this isn't a spoiler, I decided it was fair because it's on the back of the book).  Anyway, there's a   gap of nearly 30 years between the publication of that book and The View from Saturday, and I was a little worried -- what if it didn't live up to my beloved favorite?

I was not disappointed.  Konigsberg created an amazingly well-crafted story about four sixth graders and their homeroom teacher, who coaches them in the academic bowl team.  Each of these characters is well developed (OK, the teacher not as much as the students).  It's told mostly in flashback, centered around the state's academic bowl championship, and various questions trigger explanations of events in the four children's lives, and how they were all chosen to be on the team.

I think Konigsberg's greatest strength in this book is creating memorable, realistic characters.  Each of the stories of the four children were so interesting and well written, I wished I could read an entire book about them.  (Seriously -- E. L., if you're reading this, please consider making this a whole series).  These kids are smart and clever and nice.  I wish all them were real so they could be friends with my children.   I loved how this book celebrates academic achievement and friendship.  It might be a tiny bit heavy-handed with the message, but it's so good I'm ignoring that.

There is one thing I did want to make note of -- three of these four children are connected, not just because they are all in the same homeroom in a school in upstate New York, but because their grandparents all live in the same retirement community in Florida.  Now, to some people, that might sound extremely unlikely and contrived, and if I'd read this years ago I would have thought the same thing.  However, my in-laws did retire to Florida about 12 years ago, to the same town where several of their friends live, and now that I think about it, it makes sense.  It's really hard to pick up and move to a new state where you don't known anyone, so it's quite possible that they all did move down there, purposely.  So, not really that unlikely and contrived.

Anyway, I highly recommend this book. This is what the Newberys are all about.
Posted by Karen K. at 9:24 AM