The Reef by Edith Wharton 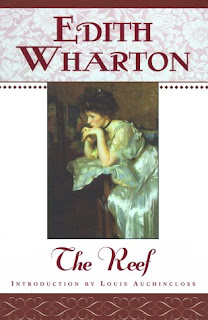 I've been a big Wharton fan for a few years now -- I'd never read anything by her in high school or college, then I got completely hooked after I read The House of Mirth. My love for all things Edith was confirmed when I read Ethan Frome. I'm also a huge fan of her short stories. But this book has left me completely perplexed. Mystified.  Confused!  (Much like the woman in the beautiful illustration on the cover.)
Time for the synopsis:  Our story begins with George Darrow, a thirtysomething American diplomat living in London.  He's recently rekindled a romance with an old flame from his youth, Anna Leath, who is now a widow with a young daughter and a grown stepson, Owen.  He's ready to get serious, and is on his way to visit her in France at her estate.  However, he receives a mysterious telegram instructing him not to come after all, with no explanation.  Darrow is very hurt and proceeds to Paris, thinking he'll wait there in case Anna changes her mind.  On the boat over, he runs into another American, Sophy Viner, whom he knows vaguely from social circles.  Sophy, a young, attractive woman in her early twenties, has quit her job, and she's on her way to Paris, where she ultimately hopes to become a stage actress. Darrow is hurt by Anna's rejection, and bored, and he's intrigued by Sophy.  While he waits for an answer from Anna, he amuses himself by taking Sophy to the theater and showing her around Paris.  There's a lot left unsaid, but it's obvious that he's considering an affair with her.
The action then jumps forward several months, and Darrow has reunited with Anna.  They're planning to marry and go off together to his next assignment in South America.  However, this is an Edith Wharton novel, so nothing is ever easy or simple, and usually ends tragically.  This involves a love quadrangle (square? trapezoid? insert your favorite four-sided geometric figure here) with a lot of secrets, lies, half-truths, and jealousy.
Wharton claimed this was her most autobiographical novel, and portions of the book are really heartwrenching.  After she divorced her husband and moved to France, Wharton had an ultimately unhappy love affair with a man called Morton Fullerton, and I suspect this novel draws heavily on that experience.  After reading this book, I feel like I've lived through her tragic love life.  The character of Anna Leath expresses some heartbreaking emotions when her love for George Darrow is tested.  This book is all about deceit, trust, and forgiveness.  However, she's such a great writer that George isn't a completely awful character, and I was really able to sympathize with all the main characters. There's so much going on here, and the book addresses so many issues, that it would great for an real-life discussion.
The book started out slowly but really picked up and caught my interest.  However, my biggest complaint about The Reef is in regards to the ending, which is one of the most abrupt and inexplicable I've read in a long time.  Honestly, I'm still not sure what happened. Now I feel like I need to research this book and find an expert to explain the ending.  Which is really sort of irritating, because I like to think of myself as a relatively smart person.
It's not my favorite Wharton, but worth reading if you're a fan. I recommend it with reservations, but if you're not familiar with Wharton, it's not a good starting point -- not nearly as good as Ethan Frome or the House of Mirth.  If, after reading this review, you are left with Fear of Wharton, I recommend her short stories.  The Ghost Stories are great, and my other favorites are Xingu and Roman Fever.  She was the master (mistress?) of dramatic irony, and I think her short stories showcase that aspect of her writing best.

During the recent Classics Circuit of Wharton's works, two other bloggers reviewed The Reef.  If you're interested, you can read reviews by Laura and The Lady Fern.
Posted by Karen K. at 9:37 PM