Cassandra and Jane by Jill Pitkeathley 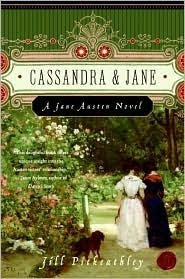 Wow, I did not hate this book. Shocking!

That is a terrible way to begin a review, but seriously, I am not a fan of Jane Austen fan fiction; if I want to read my beloved Miss Austen's works, I read the real thing (or watch one of the many excellent BBC adaptations).  Mostly, I think that authors should make up their own characters instead of appropriating from classic lit.  Plus, I have no desire to read sequels -- I really don't want to know what happened to Darcy and Elizabeth.  They got married and lived happily ever after.  And that is the end of the story.  Period.  I don't want to read about their dysfunctional marriage, or their children, or whether or not they were supernatural.  (Though I would really like to know if Caroline Bingley ever got her comeuppance.)

I'm also not a real big fan of fictionalized stories about real people.  Authors should make up their own characters!  However, I did like the BBC biopic about Jane Austen that aired a couple of years ago, Miss Austen Regrets.   And one thing I actually liked is that the actresses who played Jane and her sister Cassandra (Olivia Williams and Greta Scacci) actually resembled each other.  Which you hardly ever see in TV and movies.  I know it's difficult, but it was a great touch, and they're both fine actresses.

But I digress.  So.  This is a fictionalized biography of Jane Austen, told from her older sister's point of view.  Disclaimer:  I am not an Austen scholar, just a fan.  I haven't actually read any complete Austen biographies other than The Friendly Jane Austen and Jane Austen for Dummies, both of which I recommend highly.  I do intend to read some of the serious academic works, I just haven't gotten around to it yet.  Basically, this book just novelizes her biography, including a lot of excerpts from the letters.  There's no footnotes or anything, but you can tell they're from her letters because they're set apart and in a different font, like this:

Mrs. Hall of Sherbourne was brought to bed yesterday of a dead child, some weeks before she expected, owing to a fright.  I suppose she happened to look unawares at her husband.

However, the publishers had access to more historical-looking fonts than Blogger so it looks much classier.  Anyway, that is one of the quotes, which I'm pretty sure is an actual quote written by Jane Austen.  (She did have a sharp tongue, didn't she?)  The author does a pretty good job in writing in a somewhat Austenish style, and the book includes a lot of excerpts from her letters.  The prologue and epilogue explain how Cassandra destroyed a lot of the letters, of which there were stacks and stacks.  There are quite a few that survive, but apparently Cassandra burned all the ones that made Jane or the family appear in a bad light, which I gather is the general belief among Austenites.

Of course, being historical fiction, the author had to include some events which are probably made up -- in addition to Jane Austen's possible romance with Tom LeFroy, and her brief (one-day) engagement to Harris Bigg-Wither, the book includes a romance with a mysterious man at Lyme.  Of course, the novel also implies that events in her life show up in her famous books, like walking up and down the dangerous steps at the Cob at Lyme which are featured so prominently in Persuasion, or a family friend trying to match her up with a pompous curate rather like Mr. Collins in Pride and Prejudice.

I did really enjoy parts -- for example, it would be fun to imagine Jane's family reading and listening to the various drafts of her work, like Pride and Prejudice.  Some of Austen's characters were just hilarious, and the Austen family was known for theatricals, so they were used to this sort of thing and would have enjoyed it.   I did actually skim over the parts in which the characters discuss some of the unfinished Austen works I haven't read -- The Watsons, Lady Susan, and Sanditon.  If you haven't read all of JA's works, there will be spoilers.

This book was pretty good though mostly predictable -- but it's based on a biography and I already knew the basic story, so I'm not really complaining.  I really think the author should have included a family tree in the beginning; besides her sister Cassandra, Jane Austen had six brothers, several of whom had wives named Elizabeth or Mary, plus some of them had second marriages.  There's a list of family members in the back but it wasn't helpful since I didn't see it until after I'd finished the book.  Also, this book has some unfortunate typos that I found irritating.

So, in a nutshell -- if you are a Jane Austen fan, you'll probably like this, but more than anything it made me want to go back and read her letters or an actual biography.  But it's not bad.  As Jane herself might have said, I found it excessively diverting.
Posted by Karen K. at 9:22 AM