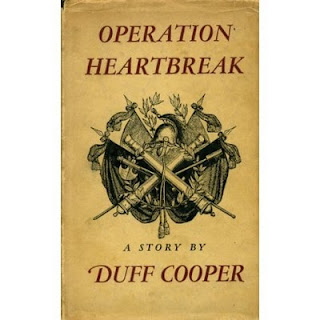 Lately, it seems like I've half my books are about World War II.  Not the war itself -- battles and military strategy are not my thing, and I tend to get bored with extended action scenes -- but the homefront during wartime, what you might call the domestic side of the war.  Three of the last Persephones I've read have been about the war at home, and the fourth (The Hopkins Manuscript) was sort of a war allegory, if I'm not mistaken.

Well, I can't say that I can relate to poor Willie's desire to go off and fight -- there are some sections in which he is so depressed that he missed out on WWI, which sounds so ghastly from other books -- but I can definitely relate to his sense of disappointment.  I had the bad timing to finish library school just as the economy began to crumble, and I don't think there's a book blogger around who doesn't realize the tenuous state most libraries are in.  I also had the bad fortune to leave an existing library job and move to a city which began a two-year hiring freeze just before I finished my degree.  I could not have chosen a worse time, and it's heartbreaking to me because I've found the ideal job for me.  So I really felt Willie's pain about his career.


This is a short book, and there's not a lot of flowery description -- the sentences are straight to the point, but they really get to the heart of what's happening in the story.  This passage in particular really captured the essence of this book.  Willie's regiment is shipping off to war, though he's been left behind once again:

The demands of security insisted that to the public eye, the regiment should be there one day, carrying on their normal functions and giving no sign of departure, and on the morrow they should have disappeared, leaving no trace behind.  Willie travelled with them to the port of embarkation and actually went on board the ship in which they were sailing.  When he had shaken hands with some of his friends and come over the side for the last time he had a curious and most uncomfortable feeling in his chest, and he found himself foolishly wondering whether people's hearts really do break, whether it might not be more than a mere figure of speech.


Just heartbreaking.  And I won't give anything away, but the ending was so moving I was glad that no one else was in the room when I finished it because I couldn't help crying.  What a great book.
Posted by Karen K. at 4:03 PM