The Slaves of Solitude by Patrick Hamilton 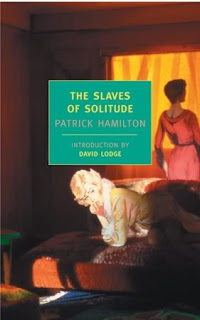 It seems like it's been forever since I posted a book review -- okay, only ten days.  I have just felt really uninspired lately.  I suppose reading two massive Victorian books back to back was a bad idea -- what was I thinking, tackling Dombey and Son right before I was supposed to read Daniel Deronda for a book group discussion??  Crazy!  (And no surprise -- Daniel Deronda is still unfinished).

Something shorter was just the thing.  My choice was The Slaves of Solitude by Patrick Hamilton, which came highly recommended by Simon at Stuck in a Book.  And what a great choice!  This is one of those books that make me glad to be a blogger -- it's one of those books of which I would like to buy multiple copies, so I can hand them out to friends (or random strangers) and say "Read this -- right now!!"

Here's the setup:  It's set in England in 1944, in Thames Lockdon, a London suburb, and the action is centered around the residents of a boarding house called the Rosamund Tea Rooms.  The main character is Miss Roach, a 39-year-old spinster, formerly a schoolmistress, who is still working at a publishing company in London since she was bombed out of her home.  Due to the housing crisis, she's forced to live in this rundown boardinghouse with some depressing people.

The most notorious of her fellow residents is Mr. Thwaites, a nasty, bullying retiree of about sixty.  Miss Roach is assigned a seat in the dining room at the same table as Mr. Thwaites, who manages to take the most innocent conversation and turn it into something unpleasant.  Unfortunately, Miss Roach is his favorite target, and either due to politeness or reticence, nobody ever seems to stand up to Mr. Thwaites and put him in his place.

Miss Roach hopes that things will turn around after she suggests the Rosamund Tea Rooms to her acquaintance Vicki Kugelmann, a German emigre with a lot of spunk.  She hopes that Miss Kugelmann's presence will change the dynamic of the boarding house.  And it does, but unfortunately not for the better, of course.  Everything goes absolutely wrong, and it began to get even more interesting.

This book reminds me a bit of Excellent Women by Barbara Pym, though it has a more melancholy undertone.  It's full of wry observations like Pym, but also a little like Jane Austen.  I'm also finding it almost satirical in parts.  Here's a passage describing the detestable Mr. Thwaites, who simply lives to bully the other residents at the boarding house:


". . . Mr. Thwaites had on fine mornings no one to boom at in the Rosamond Tea Rooms, and spent much of the time writing embittered letters in the Lounge.  These, after he had put on his overcoat and cap, he took round to the Post Office and posted in the most acid way.  He passed pillar-boxes on the way, but did not trust them, as not going to the root of the matter.


After this he would return to the Rosamund Tea Rooms, where he would prowl restlessly, and whence he would, perhaps, make one or two rapid, tigerish excursions into the town, to make an enquiry, to buy something, or to change a book -- invariably tying the assistants into knots, and, in the ironical pose of a stupid man, saying he was so sorry, no doubt it was his fault, entirely."

Mr. Thwaites is one of the most memorable characters I've read about this year.  For literary villains, he's right up there with Harold Skimpole from Bleak House or Mr. Collins from Pride and Prejudice -- not evil, but someone you'd just love to throttle.  From the moment this character was introduced, I could not wait for him to get his comeuppance.  He was rather a Dickensian character now that I think about it.

This is another of those great books in which technically, not much happens.  However, it's a great character study, and I loved the dynamics of the people involved.  These people are trapped in their circumstances by the war -- they can't find new homes, they can hardly go out at night because of the blackout, and supplies are short, except for what seems an endless supply of alcohol.  Unhappy people and drinking seems like a recipe for trouble.  I could not put the book down because I was so intrigued at how everything would play out -- which it did, in a highly satisfying manner.
Posted by Karen K. at 2:47 PM