My latest obsession is Jeeves and Wooster by P.G. Wodehouse.  I was looking for DVDs that were family-friendly but didn't bore me to death and I thought the kids might enjoy these, especially since they got a hoot out of the audiobook version of Three Men in a Boat that we listened to in the car.

My youngest daughter especially has gotten a real kick out of the videos.  We liked them so much we bought the entire series in a box set, which we found for a great price at Costco.  It worked out to about $1 per episode, which is pretty good since I know we'll watch them over and over.  It's so fun to see Hugh Laurie in his pre-House days, and Stephen Fry is just brilliant as Jeeves.  We particularly enjoy it when Jeeves disapproves of fashion choices:

[There's actually a better and even funnier montage of Jeeves' disapproval on Youtube, but somehow I couldn't imbed the video.  If you're interested, click here.]
Anyhow, I've found watching the series absolutely delightful and it inspired me to pick up more Wodehouse at the library recently.  I have far too many books checked out and on the TBR shelves, but I needed a break from all the big fat Victorians I've been reading lately.  I could not resist this cover: 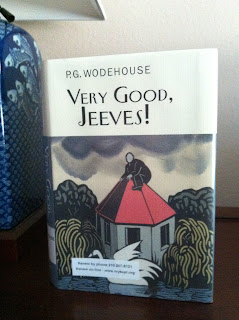 Of course it would look so much better without the library sticker covering up the swan on the front.  Oh well.  If you haven't fallen in love with these already, they're the Overlook Press reprints of the works of P. G. Wodehouse.  He published more than 90 books and I think they've reprinted about 75 so far.  Which could be dangerous!!   I had a birthday recently and I strongly hinted to my family that any of these would be greatly welcomed.  Well, I suppose "hint" would be an understatement; I handed my husband a Borders coupon with the words "P. G. Wodehouse Overlook Press" written on it in large printing, so he wouldn't miss it.  I admit that I am not terribly subtle.  The result was this nice little stack: 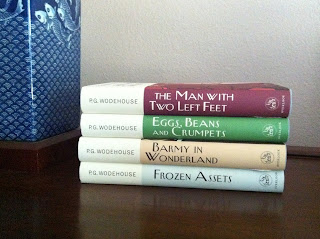 I've started reading The Man With Two Left Feet, which is a collection of Wodehouse's early stories, including the very first appearance of Bertie and Jeeves.  Jeeves is merely mentioned and Bertie's apparently has no last name, but it's still pretty funny.  The dreaded Aunt Agatha ships Bertie off to America to prevent his cousin from making a ghastly marriage to a chorus girl.  Bertie does not enlist Jeeves' brainpower and it all goes terribly wrong, of course, though hilarity still ensues.  Perfect summer reading!
Posted by Karen K. at 9:27 AM