Death Comes for the Archbishop by Willa Cather 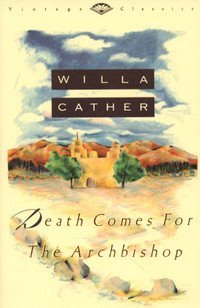 After reading The Professor's House, I was really looking forward to Death Comes For the Archbishop which was the selection of my real-life classics book group.  In fact, I've been looking forward to this one since we selected it and put it on the schedule last fall.

If you are not familiar, here's the setup:  Beginning about 1850, Father LaTour is a young French missionary prince, working in Ohio.  Some church elders decide he is the perfect person to administer the enormous vicarate of New Mexico, as the new archbishop.  The story is basically a series of vignettes in the life of Father LaTour and his boyhood friend, Father Valliente, another missionary who accompanies him on his journey to save the souls in the Southwest.

I feel almost guilty writing this, but I just did not get why this book is so beloved.  It's considered one Cather's best works, if not THE best, but I found it disappointing, and really slow.  Of course, the writing was wonderful, but I just hard a hard time connecting with the story, which isn't really a narrative -- it's just little slices of the lives of Father LaTour and Father Valliente.  It's almost like a series of short stories.  It's possible I didn't appreciate it as much because I took a break in the middle of reading it, a couple of weeks, and I had a hard time getting motivated to pick it up again.  However, I honestly didn't care much about the characters.  Father LaTour didn't really seem to be very developed to me.

I'm not a religious person, and I was actually raised Catholic though I don't agree with it.  I'm not going to use this post to get into a big religious discussion (and if I get any hateful comments I WILL delete them); in general, it just didn't really interest me.  I actually got rather offended at times when Cather wrote about some of the abuses of power shown by the priests.  There's a scene in which a Mexican woman, who's been enslaved by a horrible white family, comes to Father LaTour -- does he help her and give her refuge?  No, he hears her confession and sends her back to her captors!  Now, as far as I know, this book is set before the Civil War, but to my recollection slavery was never legal in New Mexico, and definitely not the slavery of Mexicans by whites!!  I was appalled.

I also disliked how condescending the white characters were to both Mexicans and Indians.  I wasn't shocked when it was characters who were obviously unsympathetic jerks, but even Father LaTour was kind of racist.  Cather repeatedly refers to his parishoners as "yellow" and "red." I should have expected it, because it is a historical novel, but I did find it kind of offensive.  I never got the impression that Cather was racist, since she portrays the Mexicans as loving and generous, and the Indians with great dignity and respect.  It was just the white characters that really bugged me.

Of course, Cather's writing was great, and I do think the best thing I liked about it was the sense of place.  At our book group discussion, Amanda pointed out that New Mexico itself is almost a character in the book, because it plays such a big part.  Cather writes repeatedly about the canyons, the rocks, the pinon and mesquite trees, the enormous sky and the clouds, in such a way that made me feel as if I was right there with Father LaTour:

The weather alternated between blinding sand-storms and brilliant sunlight.  The sky was as full of motion and change as the desert beneath it was monotonous and still -- and there was so much sky, more than at sea, more than anywhere else in the world.  The plain was there, under one's feet, but what one saw when one looked about was that brilliant blue world of stinging air and moving cloud.  Even the mountains were mere ant-hills under it.  Elsewhere the sky is the roof of the world; but here the earth was the floor of the sky.  The landscape one longed for when one was far away, the thing all about one, the world one actually lived in, was the sky, the sky!
Now, if that doesn't make you want to buy a ticket to New Mexico, I don't know what will.  And I'm still going to keep reading Cather -- I still have The Song of the Lark and Shadows on the Rock on the TBR shelf, and both look wonderful.
Posted by Karen K. at 11:25 AM