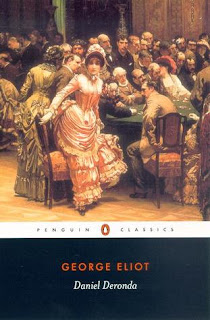 I don't know if anyone actually notices my little "Currently Reading" box on my blog sidebar, but if you do you may realize I have been reading Daniel Deronda for more than a month now.  This book just seems like it's taking forever.  It started out really well, but now I'm stuck at about page 370.  I've been trying desperately to hit the 400 page mark, and I just keep falling asleep or getting distracted.  I'm not sure if it's me or if it's the writing.  I'm not sure if I can blame it on George Eliot -- I loved Middlemarch once I got past the first 100 pages, and I thought Silas Marner was good even thought it was slow for such a short book (I actually listened to it on audio and I read it when I was walking the dog).

I've read three other Big Fat Victorian books so far this year, and I've had the same problem -- I usually seem to get stuck about halfway through, and it's hard for me to get motivated to finish them.  Is it just me, or is this a persistent problem with 19th century novelists?  Does anyone else notice that they tend to drag in the middle?  I wonder if it's an issue with serialization, or if it's just those particular authors, or just these specific books.  I haven't read any Trollope lately but I don't remember that problem with either Barchester Towers or The Way We Live Now.

It was probably a mistake to even start this book -- seriously, I just finished Dombey and Son by Charles Dickens; and earlier this year I completed Charlotte Bronte's Villette and The Three Musketeers by Dumas for online readalongs.  So those combined with Dombey totaled about 2000 pages, not including endnotes. 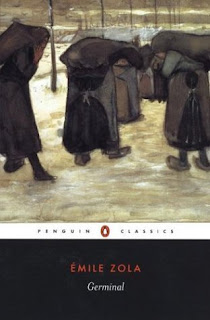 And it gets worse -- I'm scheduled to start Germinal by Emile Zola for my Classics Book Group and one of my other book groups is discussing North and South by Elizabeth Gaskell in August!  That's another 1000 pages or so!  What the heck was I thinking?
I suspect my problem is that I just belong to too many book groups, and I'm tempted by too many readalongs (Both Villette and Three Musketeers had been sitting around the TBR shelf for several years, and I really wanted to finish them.)  Daniel Deronda was for my Jane Austen group -- of course I hadn't finished it in time for the discussion which was two weeks ago.  (In my defense, only one person in the group actually finished it.  One person watched the BBC adaptation, and nobody else read it.)
Bloggers, I need your advice -- should I stick with Daniel Deronda or move on to something else?  Does anyone else get discouraged halfway through a Big Fat Book?  Or am I just trying to read too many 19th century novels too close together?
Posted by Karen K. at 8:02 PM