Zeitoun and a Book Group Update 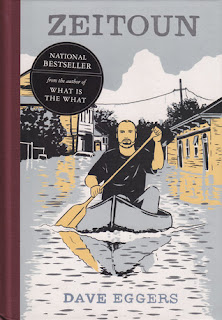 I am miserably behind on book reviews, but this is a combination review and update about the library book group I started a few months ago -- the one that nearly disintegrated after the second month.

Last week we had our fourth meeting, to discuss the nonfiction book Zeitoun by Dave Eggers.   At the time I chose the book, I'd had a meeting where no one showed up, so I had absolutely no input from anyone when I had to choose the book so it could be included in the library's monthly newsletter.  I'd heard great things about it, and nonfiction always tends to lend itself to good discussions.  Plus it's not terribly long.

If you are not familiar with the book, here's the basic setup:  In this true story, Abdulrahmin Zeitoun is a Syrian immigrant living in New Orleans in 2005, on the eve of Hurricane Katrina.  He and his wife Kathy (an American who had previously converted to Islam before they met) have five children and are running a successful contracting business in New Orleans.  As it becomes apparent that this is no ordinary storm, Kathy takes the kids and the dog north to stay with family, while Zeitoun stays behind to help clients prepare, and to keep an eye on their rental properties.  He rides out the storm successfully, but after the levees break, he paddles around the city in an old canoe and ends up helping a lot of stranded people -- until he is arrested on suspicion of terrorism, and kept in horrible conditions in a makeshift jail without a phone call or legal representation.

I really liked the writing in this book, and the story is both fascinating and horrific (plus a very quick read).  The amount of research and detail is absolutely wonderful, and it was a great book for discussion because there were so many issues, including the treatment of Muslims in America, racial profiling, the family dynamic, and so on.

Before the meeting, I was a little concerned that the discussion itself might become heated or uncomfortable.  I knew a few of the people that would show up, but I had no idea how the rest would react or if arguments about religion and politics would break out.  We ended up with ten people at the discussion, which apparently is the largest book group meeting at this library branch in a long time!   But everyone got along very well, for which I was grateful.

My one problem, however, is that one of the group members seemed to have a very different idea of what the book discussion should entail.  I got the distinct impression that she thought I should be doing much more research and giving deep background about the book, rather than just being prepared to lead a discussion.  This book group member also seems extremely opinionated and vocal about a lot of things, especially about the selection of future book selections.

Has anyone else had to deal with difficult people in book discussion groups?  How did you handle it?  And how much research and preparation do you do when you're leading a book discussion?  I'd be grateful for any suggestions.
Posted by Karen K. at 10:30 AM