Sapphira and the Slave Girl by Willa Cather 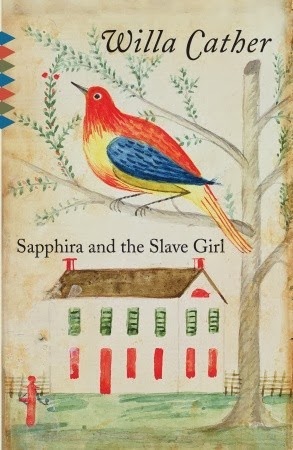 When I picked out my list of books for the Back to the Classics Challenge, I was going to read Shadows on the Rock by Willa Cather as my historical novel -- mostly because one of my favorite bloggers, Thomas at My Porch, raved about it in this review.  My copy of Shadows is 1931 edition bought in Fredericksburg, TX, at an antiques store with a really nice selection of books in the basement level.   I keep putting off reading it because I'm a little afraid of damaging it.  Instead, when I was searching for my next read, I randomly grabbed Sapphira and the Slave Girl off the TBR shelves (I still have a bunch of Vintage Classics by Cather that I bought during the Borders liquidation).

Anyway, Sapphira and the Slave Girl is the final novel written by Willa Cather, published in 1941.  Unlike most of her novels, it's set in the antebellum South, in Western Virginia.  It's 1856, just a few years before the Civil War.  Sapphira Colbert is a middle-aged woman with grown daughters, and the owner of a prosperous farm and the town's mill.  Years before, after inheriting property from an uncle, she "married beneath her" to the son of Scottish immigrants and moved from the city to a rural area, much to the shock and dismay of her family and friends.  Her children have grown up and mostly moved away, and she's had some health problems which have disabled her and she's now in a wheelchair.  Her husband Henry mostly lives at the mill, so she's pretty much alone in the big farm house with all the slaves.

One of the slaves, Nancy, is an attractive young mixed-race girl, daughter of Sapphira's maid, Till.  Nancy's father is unknown but people speculate it was one of the master's brothers, who are known for their randy behavior; or possibly a Cuban portrait painter who once visited.  Nancy was once Sapphira's favorite, but lately her behavior to Nancy has become cruel, for no apparent reason.  Soon, the reader learns that Sapphira is suspicious of Nancy's relationship with Henry.  Are they father and daughter?  Lovers?  Sapphira's behavior to Nancy becomes increasingly cruel and manipulative.  At first it just seems petty and vindictive, then the reader learns that Sapphira really has it in for Nancy, to the point at which things become drastic.  Meanwhile, Henry is struggling over the morals of slavery, and their grown daughter Rachel becomes drawn into the unfolding drama.

This book started out a little slowly, and I actually put it down for a week because I thought it was going to be incredibly depressing.  However, after I gave it another try, I became drawn into the story.  Cather's writing as always is wonderful, and she's especially good at describing scenery without becoming too flowery.  The Virginia countryside must have been stunningly beautiful.

Cather also did a really good job at showing Henry's moral dilemma.  At first, I was having a hard time figuring out if Cather was a racist or not -- there are multiple uses of the N word, which makes me uncomfortable, even thought it was in the context of a historical novel; also, there were other references to the slaves that would have been common by white people at the time, especially by slave owners.  Ultimately, Cather is exploring the issue of slavery and it becomes obvious at the end she's not racist.

While I was reading this, I kept thinking about the movie 12 Years A Slave, which was just nominated for multiple Oscars.  I haven't seen it yet because I know it's going to be really difficult to watch.  It's a really awful part of American history.  Sapphira and the Slave Girl had a few uncomfortable parts but is really worth reading. It's a Cather novel that nobody seems to read any more, but I really liked it.

I'd like to read some more Cather this year -- I still have to choose an American Classic and a 20th Century Classic for the Back to the Classics Challenge.  Besides Shadows on the Rock, I still have Lucy Gayheart, Alexander's Bridge, and A Lost Lady on the TBR shelves.  Bloggers, have you read any of these?
Posted by Karen K. at 9:28 AM

Labels: 2014, Back to the Classics, classics, historical